- Tarder Joe’s Rhubarb &Strawberry Soda: I love that this has natural ingredients, but even though it’s sweetened with cane sugar, I found it too dry for my taste, and a bit bland. Sadly, I won’t be buying this again. 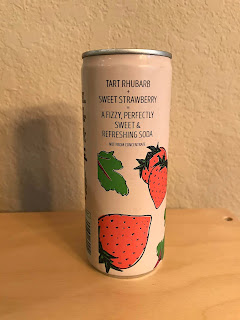 - I tried Lavva plant-based yogurts. I really wanted to like this – it’s got probiotics, it’s vegan, there’s no added sugar, and it’s full of “superfoods”. But it was disgusting! I strongly disliked the strawberry flavor, and I threw away the raspberry flavor about halfway through because I couldn’t take it anymore. I’m not buying those again!

- But that’s not the case for all vegan yogurts, because I also had a raspberry So Delicious coconut yogurt and *that* was delicious!

- I tried Sorbabes sorbet in Pistachio & Caramel. I thought it would be creamy, because it’s made with nut butter, but the first ingredient is water, so the sorbet is too hard for my liking and a bit bland as well. The raspberry with chocolate looked good too, but I’m afraid it’ll have the same issues.

- I finally got to try some Nada Moo vegan ice cream! Nada Moo is a scoop shop in Austin, but their pints are making their way into local grocery stores. I tried the Marshmallow Stardust flavor and loved it! It has confetti sprinkles, a raspberry jam swirl, and marshmallow flavor, all in a coconut milk base. Plus, the purple is colored with ube powder! They have lots of interesting flavors and it’s a really nice treat. 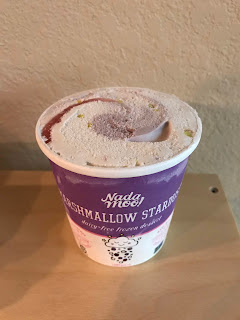 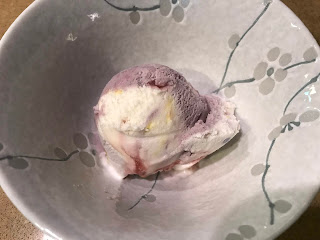 - I tasted two of Trader Joe’s non-dairy mini-mochis, the chai tea flavor and the mango flavor. The chai really wasn’t for me, the flavors were too strong and there was something unpleasant about it. We ended up throwing most of it away. (I know that Trader Joe’s actually offers refunds on products you don’t like if you bring them back, but both the Engineer and I were uncomfortable doing that!) The mango flavor is great, though! It’s essentially a bite-size piece of mochi surrounding mango sorbet, and it’s a nice treat. I can’t find a link to them, but someone else reviewed them here. 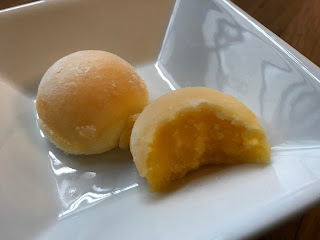 - I’m always on the lookout for easy after-school snacks that don’t have too much sugar, so I tried Taos Bakes bars. While it’s true that they have natural ingredients and kept me full longer than regular snack bars, my kids didn’t like them, so I won’t buy them again (even though I personally liked them).

- I also really like The New Primal’s Snack Mates chicken and maple meat sticks (see here to buy 40 sticks at a good price; they are also sold at Whole Foods in packages of 5). It’s a great snack with protein and few calories. The only caveat is that the recipe has changed over time, as evidenced in the photos below – oldest to newest from left to right (I had open packages in the pantry, diaper bag, and carry-on travel bag, and cleaned up all at once). I like the softer, plumper ones, but all the ones I ate were good. 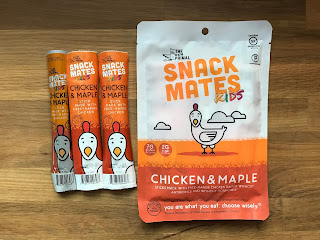 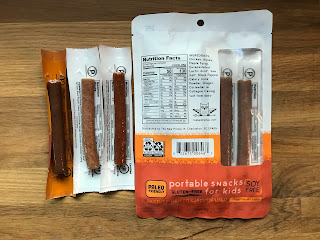 - Sometimes, I put chicken nuggets in my kid’s lunch for school (the most healthy-looking ones I can find, and it’s an occasional treat for him). That being said, we recently tried little vegetable nuggets by Dr. Praeger’s (the broccoli and the sweet potato varieties), and he liked them both! I also made them for an at-home lunch, and the Fox and I can confirm that they are delicious. They are available at Whole Foods. 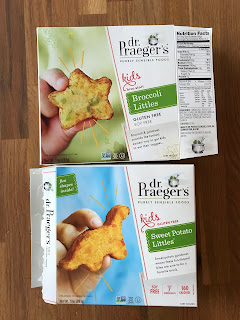 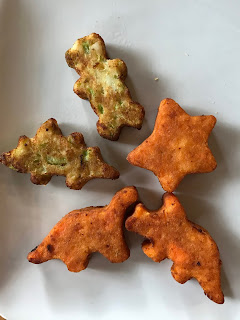 - I have also come to love Old El Paso’s Mini Soft Tortilla Taco Bowls, because they are perfect for a lunchbox! Just the right size for the main compartment of a typical container, and most importantly, they stay upright, are easy to hold, and keep their fillings! Great for dinners at home, too.

- Finally, there’s a company called 88 acres that makes seed products (think: butters, granola, granola bars) that are not cross-contaminated with nuts. My friend Jen had mentioned that she liked them, but then I heard about one of their products in a magazine: watermelon seed butter. I mean, I was obviously intrigued, but it was all-the-more timely given that the Little Prince had decided that he was sick of sunflower seed butter, and I don’t want to send him to school with peanut or nut butter. I ended up ordering a variety pack of their seed butters to taste all seven kinds they make (including sunflower butter flavored with maple, cinnamon or chocolate as well as their pumpkin seed butter) without committing to a whole jar. It turns out we love this! Watermelon seed butter is pale in color, tastes nothing like watermelon (the same way that pumpkin seeds don’t taste like pumpkin), has the same consistency as other natural seed butters, and is really good. It’s actually more neutral than pumpkin seed or sunflower seed butter. If I’m going to eat it plain on toast, I like the one I linked to, but there’s also an unsweetened version, which actually might work better in a seed and jam sandwich. 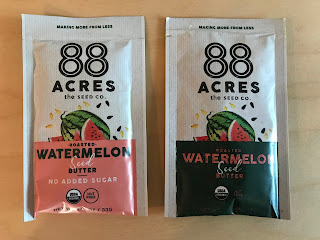