During the last democratic primaries, all 196 candidates were trying to stand out one way or another. I’m not going to say who I would have voted for (I wasn’t eligible to vote anyway), but I’ll admit it wasn’t Amy Klobuchar. That being said, it came to my attention on Twitter that she published her recipe for hotdish as part of her campaign, and I was like, “What’s hotdish? And why does it pass spell check?” According to Wikipedia, in the Midwest, hotdish is “a casserole that typically contains a starch, a meat, and a canned or frozen vegetable mixed with canned soup.” It doesn’t necessarily sound appetizing said like that, but I’m assuming that people might think the same about pâté chinois, so I decided to try it.

This version had ground beef and tater tots; I replaced the pepper jack cheese with sharp cheddar cheese and made my own cream of chicken and cream of mushroom to keep think lactose-free. I also increased the amount of beef a bit, so the ratio below may be off from… what God intended? Anyways, the boys LOVED it! And by “boys” I mean both my kids as well as my husband. Next time, though, I would consider just doubling the amount of cream of chicken and omitting the cream of mushroom, to greatly simplify prep for those of us who are lactose-intolerant.

A can of “cream of whatever soup” is typically 10.5 ounces, so roughly 1 ¼ cups in volume. In order to substitute for the can of cream of mushroom, I made this recipe. Of course, it makes a whole pot of soup, but it was thick enough that I decided it was a fine substitute. And then it felt like at least my hotdish had *some* kind of vegetable in it? I could have used 2 ½ cups and omitted the cream of chicken, I guess, but my cream of chicken substitute is simple to make (more so than I remembered, even), so you could just double THAT instead of making cream of mushroom. As you wish. It should go without saying that hotdish is not a naturally photogenic dish.

Melt the butter in a small saucepan, then add the flour. Cook, whisking constantly, until the mixture thickens. (You’re making a roux.)


For the hotdish
2 lbs. ground beef
1 small onion, diced
2 cloves of garlic, minced
1 can cream of mushroom (see note above)
1 can cream of chicken (see above)
salt and pepper, to taste
8 oz. sharp cheddar cheese, shredded
1 package tater tots (mine was 28 oz.)

Brown the ground beef, then set aside and drain off the fat. Sauté the onion and garlic in the same pan.

In a large bowl, mix together beef, onion, garlic, both cans of soup, salt, and pepper.

Spread evenly into a greased 9”x13” baking dish. Cover with half the shredded cheese, then place tater tots in one layer over the entire pan.

Bake for 30 minutes, or until the taters are crisp. Cover with remaining cheese and bake until cheese melts, about 5 minutes. 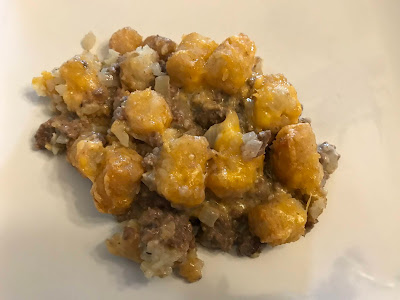 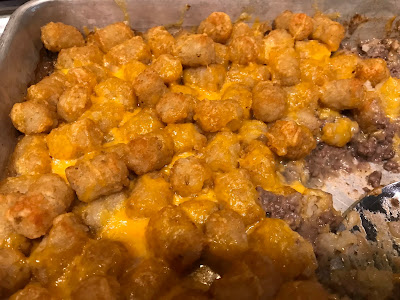