I haven’t been very active on here this month because, in addition to homeschooling the Little Prince while keeping the Fox entertained and running the household, I’ve been taking some professional development classes. You see, my professional association decided to offer a limited number of online classes for free to its members during the month of April, since for most of us, our income either decreased or became non-existent in the pandemic. But that means I only had a limited time to complete the courses, so I decided to prioritize that over blogging. I’m done with those now, though I’m taking another course separately – more on that later. My favorite courses were about setting up a family command center, preparing for an emergency or a natural disaster, and which 9 apps (as opposed to 50) are “must haves” to streamline one’s life.

I’m back with a zucchini quesadilla recipe that my kids actually ate – though the Little Prince would like it noted that they were not his favorite. (Still, the fact that he ate them instead of leaving them in his plate as he does with things that he really doesn’t like is a win!)

Heat a large skillet over medium. Once hot, add oil. Once oil is hot, add garlic and cook, stirring, until just golden at the edges, about 1 minute. Add zucchini, 1 teaspoon kosher salt, and red pepper flakes and increase heat to medium-high. Cook, turning over occasionally, until zucchini becomes soft and starts to break down, about 5 minutes. Reduce heat slightly and cook 7 to 10 minutes more, at which point the zucchini will be jammy and very tender. Taste for seasoning. Add the juice of half your lime and scrape mixture into a wide bowl. Let cool slightly while you prepare any toppings or grate the cheese, if you probably haven’t done so yet.

Add cheese to zucchini mixture and mix. Lay out 6 of your tortillas and divide the filling between them, going all the way to the edges. Place remaining 6 tortillas on top.

Heat a skillet (ideally non-stick, and you could even just wipe clean the large skillet from the first step) over medium heat and add a couple teaspoons of oil. Transfer your assembled quesadillas to the skillet and cook until deeply golden and crisp underneath, letting whatever cheese seeps out cook and crisp in the pan. Flip quesadilla(s) and repeat on second side. Try to take all of the lacy brown cheese with you when you remove your finished quesadillas from the pan. Squeeze the juice of the remaining lime half over them. 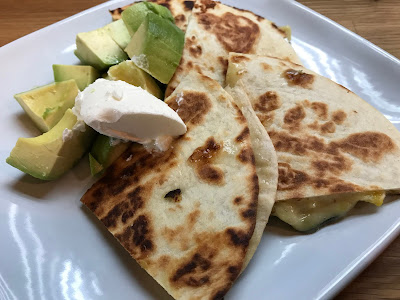