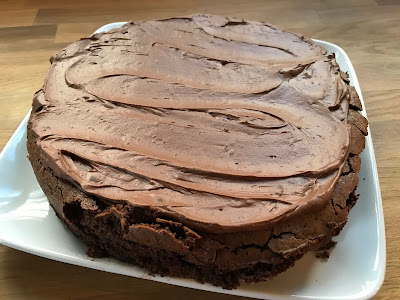 Happy Passover! This chocolate cake was created to be kosher for Passover and parve, but it’s good year-round. (For everyone not celebrating Passover, that essentially means it’s gluten-free and dairy-free.) It’s made with roasted almonds, which make it really flavorful! I unfortunately didn’t have enough almonds on hand, so I topped it up with hazelnuts and raw almond flour, but I’ll be the first to say that it would have tasted better with roasted almonds. The cake is meant to be chewy and dense, rather than spongy; that’s because the eggs aren’t separated, and they are only beaten until frothy but still free-flowing, BEFORE the slowly dissolving ribbon forms.

Also, I should say that I may have overbaked the cake (I baked it for 60 minutes instead of 35-45 minutes), because it didn’t seem like it was done when I inserted a toothpick in it. But I think that in this case, the residual heat from the oven would be enough to finish cooking the cake once you remove it from there, and perhaps the texture *should* be a bit fudgy rather than too cakey. (I mean, obviously it should be set, though, not jiggly in the middle.) I think that’s why mine crumbled so much – the edges were VERY fragile. That being said, it was delicious! I didn’t bother making the almond-coconut clusters to top the cake, though.

For the cake
Place a rack in middle of oven and preheat to 350 °F. Lightly brush a 10"-diameter cake pan with oil. Line the bottom with a round of parchment; brush parchment with oil. Dust sides of pan with cocoa powder; tap out excess.

Pulse almonds, salt, and ¼ cup cocoa in food processor until nuts are finely ground. Add shredded coconut and pulse a couple of times to combine.

Beat eggs on medium speed in the bowl of a stand mixer fitted with the whisk attachment until no longer streaky, about 20 seconds. Add both sugars and vanilla, increase speed to high, and beat until mixture is pale, thick, and starts to hold the marks of the whisk, about 2 minutes (it should fall off the whisk and immediately sink back into itself). Switch to the paddle attachment and with mixer on low speed, gradually add chocolate mixture. Beat to incorporate, then mix in almond mixture. Fold batter several times with a rubber spatula, making sure to scrape the bottom and sides. Scrape batter into prepared pan; smooth top.

Bake cake until firm to the touch and a tester inserted into the center comes out clean but greasy, 35–45 minutes (see note above). Transfer pan to a wire rack and let cake cool 15–20 minutes in pan (cake might fall slightly in the center; that’s okay). Run a paring knife or small offset spatula around edges of cake; invert onto rack. Carefully peel away parchment; let cool completely.

For the ganache and assembly
Preheat oven to 350 °F.

Combine chocolate, 1 Tbsp. agave nectar, and salt in a medium bowl. Bring coconut milk to a simmer in a small saucepan over low; pour over chocolate mixture. Let sit until chocolate is melted, about 5 minutes.

Using an electric mixer on medium speed, beat chocolate mixture until it has lost its sheen and is thick enough to hold very soft peaks, 6–8 minutes (ganache won’t be quite as thick as frosting but close).

Working quickly before ganache starts to set, scrape on top of cake and spread to edges with a small offset spatula or knife. Top with almond-coconut clusters. 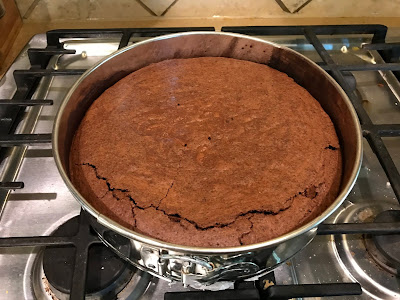 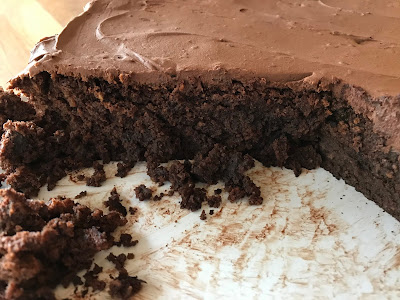 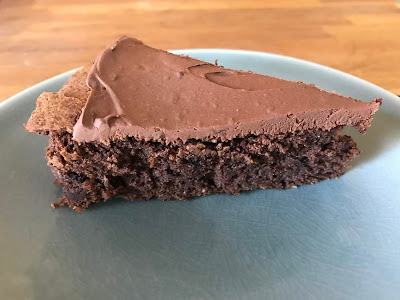