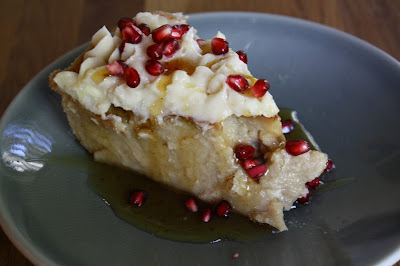 The Engineer made a recipe not long ago and announced that he would have about 5 cups of apple cider left over in the jug after that, for me to dispose of (given the internal labor division of our household and all). I made apple cider doughnut pancakes with 1 cup of it, and then decided to tackle a recipe that has been in my bookmarks for probably three and a half years: vegan pumpkin cheesecake with apple cider reduction, which turned out to be a mitigated success. I mean, there was a point at which I thought I would have to chuck the whole thing down the drain because it was still liquid after 2 hours in the oven, but leaving it in the fridge overnight before serving it worked wonders. It was still wobbly as heck, and it was near impossible to land a slice of it upright on a plate, but it was somehow more solid than the vegan pumpkin cheesecake with cranberry toping I made a year ago… The recipe is from the Candle Café cookbook, but judging from the picture that accompanies the original post on The Kind Life, I wonder if it’s the type of cookbook that doesn’t actually give you the real recipe used in the restaurant!

I’m therefore making a few changes in the recipe below, but I admit that I haven’t had time to test them (and since the cake calls for 2 cups of maple syrup, testing this again would severely deplete my reserves of the stuff). I would omit the soy milk entirely – who puts liquid in a cheesecake, anyway? I’m also omitting the agar powder, which wouldn’t be needed without the liquid, I’m sure. I’m also halving the amounts for the apple cider reduction (the original recipe made way too much) and using the full recipe for the frosting. Obviously, it’s not necessary to frost a cheesecake, but it made this one special, helped camouflage the overbrowned top of the cake, and was the Little Prince’s favorite part (I’d actually recommend not using the cream cheese, though, as I found the frosting better before adding it). I’d consider making a graham cracker crust, too. All in all, this cake was good, but not great, though it could certainly be improved!

For the cheesecake
Preheat the oven to 350 °F. Wrap aluminum foil around the bottom and up the sides of a 9-inch springform pan to prevent any leaking.

Combine the cream cheese, agave, soy milk, pumpkin, tofu, arrowroot, agar, cinnamon, and nutmeg in a large mixing bowl and stir together. Transfer to a blender and blend until smooth and ingredients are fully integrated. (This may have to be done in batches.) Pour the mixture into the prepared spring form pan.

Put the cheesecake in a large baking pan and fill the pan halfway with hot water. Bake for about 2 hours, until lightly browned. Remove, let cool, cover, and refrigerate. The cheesecake can be made up to 2 days ahead of time.

For the apple cider reduction
To make the apple cider reduction, combine the cider, sugar, and nutmeg in a pot and bring to a simmer over medium heat. Simmer, stirring occasionally, until the mixture is reduced by half and is syrupy, about 1 hour. The reduction can be made and refrigerated up to 2 hours ahead of time. Bring to room temperature before serving.

For the vanilla frosting
Mix together the confectioners’ sugar and margarine in a large bowl or a stand mixer. Set aside.

Combine the creamed coconut and vanilla extract in a blender and blend for 2 minutes. Transfer to the bowl with the sugar-margarine mixture, add the cream cheese (if using), and mix thoroughly until a smooth frosting is formed.

To serve, remove the foil from the pan. Run a knife around the outer edge of the cheesecake and release the spring form pan clamp. Put the cake on a plate or cake stand. Pipe or spread the top of the cheesecake with the frosting. Drizzle the reduction over the cheesecake. Cut into wedges and serve. (I threw some pomegranate arils on there because I had them lying around and because I felt like it needed some color.) 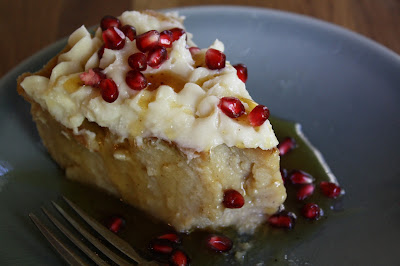