Outings 2018, part 1 - In which we officially become curmudgeons

In January, we went to the San Antonio Fire Museum. It’s housed in what was a functional fire station until 2011, just steps from the Alamo. (There’s a tiny parking lot across the street at something like $5 a day, so if you get there early, you might get a spot there.) Tickets are relatively inexpensive ($5 per adult, $2 per child), and most of the docents are retired firefighters who are volunteering their time. The museum is in two parts: the first has antique firetrucks (the oldest is from 1892!) and exhibits about the history of firefighting in the U.S., while the second part is both more modern and interactive (kids can climb in the back of a firetruck and try on equipment, there’s an ambulance as well and a play area for little ones). We all had fun, though it should be said that you can easily visit the whole thing in about 1 hour. 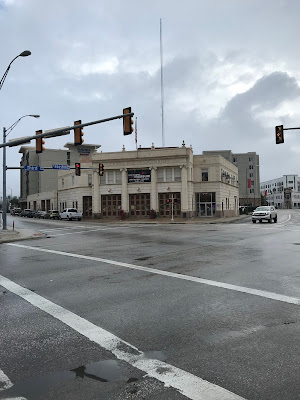 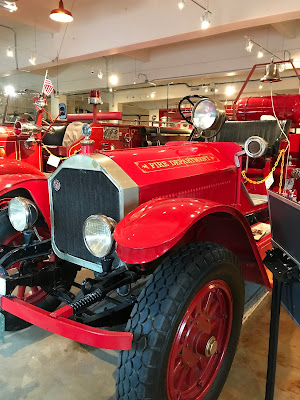 In February, we had our big road trip, and we didn’t do anything special in March.

In April, we went to Natural Bridge Wildlife Ranch (very close to, but not actually affiliated with, Natural Bridge Caverns). The Ranch is a drive-through safari, without any major carnivores. Admission gets you a bag of animal feed, though you have to pay an extra $3 for the guidebook that explains all about the animals you’re about to see – personally, I wish it were the other way around, because the guidebook seemed necessary to get the full experience, but you don’t really have to feed animals on your way through (we fed some of them, but still had about half of our bag left at the end of our visit). Honestly, without the guide, you’ll just be pointing to a lot of animals and calling them “some kind of deer”, but isn’t it nice to know which one is a barashinga from India and which one is a kudu from Africa? And in which species both sexes have horns? (The guide also has cool facts – did you know that a group of giraffes is called a tower?) Anyway, we were impressed by the watusi, which is the largest horned animal in the world (it’s from Africa, and both sexes have horns which, tip to tip, can span over 8 feet). We also liked seeing giraffes, scimitar horned oryx, addax, and zebras. My favorite part, though, was the ostrich which decided to repeatedly tap the passenger-side mirror next to me even as it ignored the food I threw on the ground. It was close enough that I could have reached out and touched it (except I’m really not supposed to, obviously). The speed limit is 5 M.P.H., and with 6 miles of road, plus stopping either to get a better look or because of traffic, the drive-through should take about an hour and a half. After the tour, there is a petting barnyard with goats, a chicken coop, some African crowned cranes, kangaroos, gibbons, and a lemur. 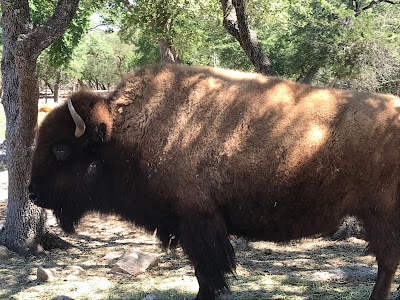 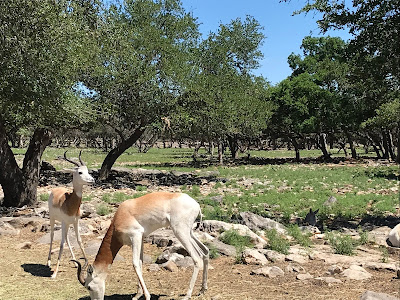 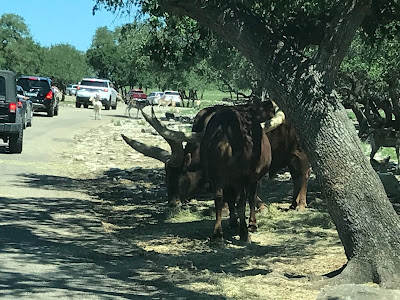 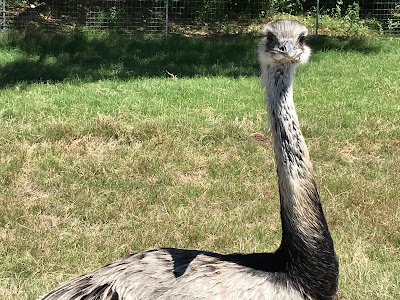 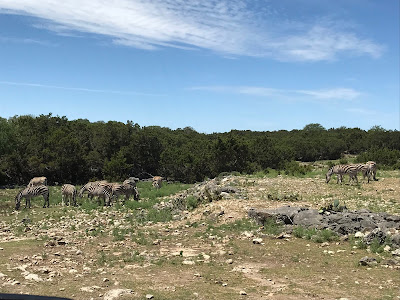 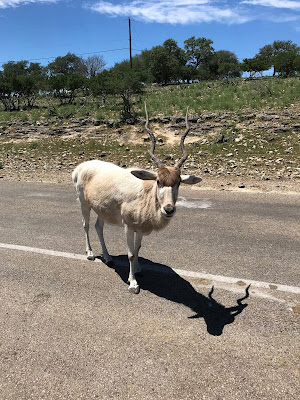 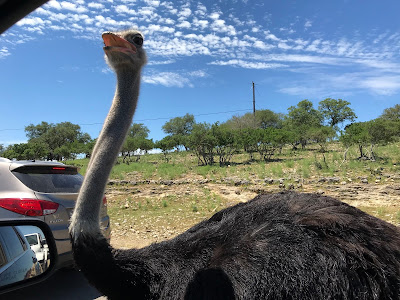 Then last weekend, for a May outing, we finally went to SeaWorld. We figured that since we’re locals now, we really should go at some point, but as tickets are so expensive (and we realized on the spot that parking is extra!), we always thought we would just go when we had out-of-town guests who wanted to go as well. It hasn’t happened yet, and the Engineer pointed out that this was the last time we could go without having to pay for the Little Prince’s admission, so off we went. Tickets are less expensive if you buy them at least three days in advance, but if you plan on going more than once, an annual pass is immediately worth it. (We didn’t go to the Aquatica water park, so we missed out on seeing the aviary.) So, good things about SeaWorld… Allergy-friendly places to eat; lots of fun for kids of the right ages/heights; opportunities to see animals we wouldn’t get to see otherwise. I mean, I watched Blackfish, so I didn’t need the protesters at the entrance to remind me of all that, but I still went to the killer whale show with the Little Prince. To be fair, SeaWorld does seem to have learned from the whole thing and they now certainly put the emphasis on their conservation efforts and collaborations with researchers to help populations in the wild. The trainers are called behaviorists, now. And the Little Prince loved the show and loved getting splashed by the whales! On the downside, none of the theaters were accessible to strollers, so the Engineer and the Fox missed out on this one. We also went to see the penguins, sea lions, dolphins, and sharks. As for the rides, I took the Little Prince on the Shamu Express, a kids’ roller coaster that unfortunately proved too intense for him (even though he has spent literally months now watching videos of GoPro users on roller coasters and water slides). The Engineer took him on the Rio Loco, a river rapid ride where they only got a bit wet. (For the record, the Little Prince is 42” tall, which is the cutoff for that ride.) His favorite, though, was the Sesame Street Bay of Play, a big playground that is somewhat adult-friendly as well. Since the Fox doesn’t walk yet, though, there wasn’t much he could do. Honestly, it looked like both the kids had fun (or at least, the Fox was perfectly agreeable, which is as much as I could ask at this point). So why did the Engineer and I dislike it? I think it’s because it was crowded, it was hot, tickets were very expensive and refreshments were outrageously so. Should you go to SeaWorld? If you enjoy being swiftly parted from your money, then by all means, yes. I guess we’re officially curmudgeons now. 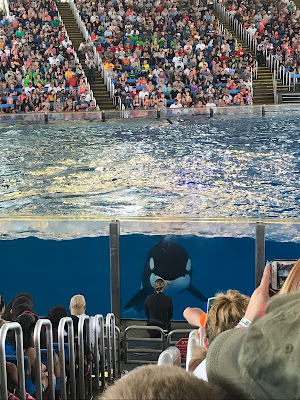