I’ve been making soup for lunch every once in a while this winter. It is easy, albeit time-consuming, to feed it to the Fox, and on the days when the Little Prince is home for lunch, he usually pokes at his before declaring he is done, but this gives him the opportunity to try other things that I think of as soup-sides, like his new favorite cheese on a cracker. I made a creamy chickpea bacon soup that was really a variation of the typical Canadian split pea soup; the Little Prince LOVED the bacon, of course, and while he refused the touch the few stray chickpeas that had escaped my immersion blender, he ate the broth containing creamed chickpeas without a fuss. And when I made the otherwise-unremarkable garlic and chicken soup, he professed his undying love of chicken. Some of my favorite soups included the delicious-but-not-photogenic egg and pasta soup from Orangette as well as this curried coconut carrot soup, that I made with less broth than called for and served with a dollop of plain yogurt and fresh herbs. 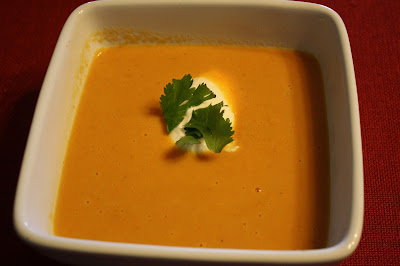 Then, I undertook the annual task of clearing out as much of the contents of the freezer as possible before our summer road trip. I had a bag of parmesan rinds, but not enough to make pasta in parmesan broth, so I decided to try the parmesan soup with tiny pasta and peas from Julia Turshen’s Small Victories. This also helped me clear tiny pasta out of the pantry, all the more reason to make it! And as it turns out, the Little Prince initially rejected the soup, up until I pointed out the tiny letters, at which point he laughed and said wanted to eat them (small victory right there). So he ate most of the pasta, trying not to accidently eat too many peas at the same time; the Fox and I ate all the components, and we recommend this delicious soup.

The recipe comes with this bonus tip from Julia Turshen: If cheese gets stuck to the bottom of your pot (which is a strong possibility, let’s face it), mix into it 1 cup water and 1 cup vinegar, bring to a boil, then turn off the heat and let stand 10 minutes. Pour out the mixture and wash the pot.

In a medium pot over high heat, combine the water, onion, garlic, and parmesan rinds. Bring to a boil, then lower the heat and simmer until the liquid is really fragrant and heady, about 45 minutes.

Strain the soup into a clean pot and press down on the strainer to get every last bit of broth out. Season the soup to taste with salt. (The broth can then be refrigerated or frozen until ready to use.)

When you are ready to eat, bring the soup to a boil and add the pasta. Cook for 2 minutes less than the package says to, then add the peas and continue cooking until they are bright green and cooked through, 2 minutes.

Divide the soup among four bowls; sprinkle each serving with grated parmesan and a few grinds of pepper. 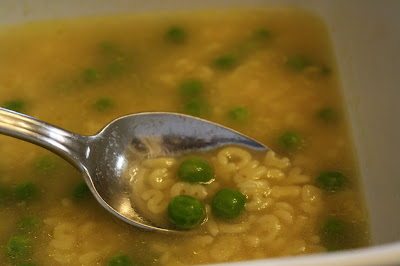 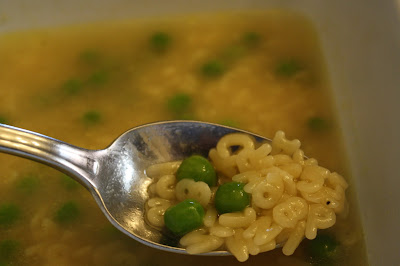