We’ve had a new schedule since September, one that requires me to make dinner ahead on Mondays because the Little Prince and I come home a tad after 6 o’clock and want to eat pretty much as soon as we walk in the door. So it’s not a good night to make something that must be served immediately, but I’ve found that something like quiche works well because I can just reheat it in the microwave (or, if the Engineer makes it home early enough, he can pop it in the oven to warm it up). Also, since the Little Prince doesn’t like quiche these days, I call it an egg-and-cheese tart whenever possible! I tried a vegan tofu quiche with spinach and squash from Coup de Pouce, but was less than impressed. I also tried a vegetarian Swiss chard and raisin quiche from the same magazine, but found that the crust was overbaked and the solids in the filling had fallen to the bottom, so despite the fact that it was pretty good, I don’t think I’ll be making it again. This is still my favorite. I once made a pot of beans to serve as a side to beef stew from the freezer. Another great option was BBQ beef tacos, which helped me use up the three (!) opened bottles of barbecue sauce in the fridge.

I wanted to share this recipe, though, a salad with chicken and lots of vegetables that is easy to assemble ahead of time. It’s also the kind of recipe that I could see myself eating after a week on the road every summer! I used this method to cook the chicken breasts, but any way is fine, and rotisserie chicken would be great too. You could replace the chicken with a cooked grain for a vegan option or add some lactose-free goat cheese while you’re at it. It turns out that this made a LOT of food; after layering the salad in a glass bowl and getting a 7-layer-dip effect, we ended up dumping everything in the biggest metal bowl in the house so that we had room to actually toss the salad.

Whisk the vinegar, lemon juice, Dijon, and salt together in a small bowl. Drizzle in the olive oil and sesame oil, and whisk until emulsified; set aside. (I do this in a glass jar with a lid.)

Chop, dice, grate, and mince to your heart's content, piling each vegetable in a large bowl as it is prepared (see note above). Add the parsley, chickpeas, nuts, and seeds and toss to combine.

Pour the dressing over the chopped vegetables and toss to coat before serving (the salad will keep in the fridge even with the dressing, though delicate greens might wilt a bit). 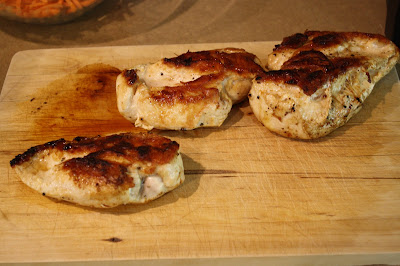 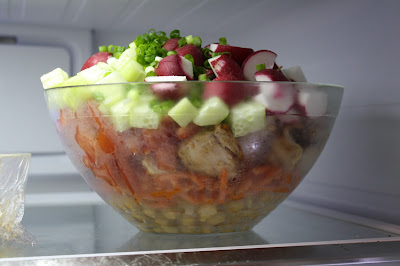 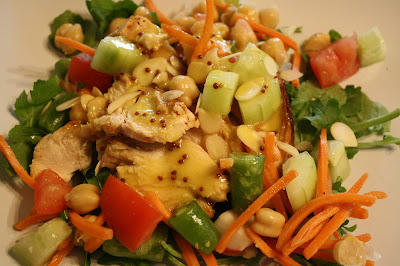