Zucchini, Carrot and Apple Bread with Pecans and Chocolate Chips

This bread is exactly what I like to eat for breakfast. It’s a bread like a banana bread is a bread, which is to say more of a loaf cake than actual bread. (The last banana bread I tried was a complete disaster, too, so I needed a sure thing.) I used pecans because this is about the only baked good in which I enjoy nuts, but you could omit them if you wanted. It’s also the kind of recipe where you could swap sweet potato for the carrots or pears for the apples, and you could add raisins or other dried fruit. The Little Prince called it “chocolate chip bread” and liked it so much that he cried when it was finished! Luckily, the recipe yields two loaves and I’ve got the second one stashed in the freezer for later, so I’ll surprise him with it.

Note that to yield 4 cups of shredded fruits and vegetables, I used 1 medium zucchini, 1 large carrot and 1 large apple, but even then I didn’t measure precisely.

Grate your zucchini, carrot and apple (I did this in the food processor). Set aside.

In a medium bowl, sift together the flour, baking soda, baking powder and spices. Set aside.

In a large bowl (I used my stand mixer), add the sugars and eggs and mix. Add the melted butter and vanilla and mix. Stir in the flour in 3 parts, then add the zucchini, carrot and apple mixture. Add the pecans and chocolate chips. Stir until well combined. Divide between the pans.

Bake on the middle shelf of the oven for 50 to 70 minutes. 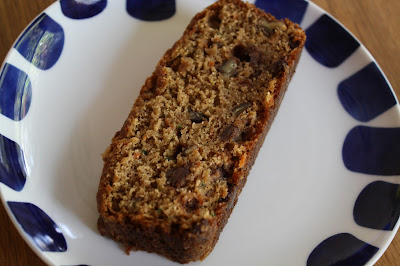