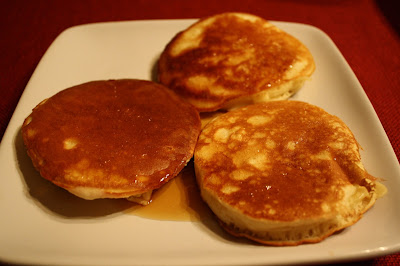 Remember when I went looking for a good go-to pancake recipe? You can read Part 1 and Part 2 to refresh your memory. Despite my love of Clayton Miller’s pancakes, the recipe that had the best taste/effort ratio was basically the lofty buttermilk pancakes that call for separating eggs but not whipping the whites, and I’ve since found an interesting article on the topic that basically confirms that they are indeed loftier than if the eggs had not been separated OR if the whites had been whipped, surprisingly enough! But there were still recipes that I wanted to try, so I did.

There were Amy Halloran’s pancakes (she of the 10 pancakes commandments), but I didn’t like them. I only got 3 smallish ones out of the recipe (which was supposed to yield 4 to 6 servings!), so I had to make a second batch to serve for breakfast; I found the batter too thick, and the resulting pancakes were also too thick and bready, and sometimes they weren’t cooked all the way through. I wasn’t at all impressed. Then there was a brief interlude with cream cheese pancakes, but those were a flop as well.

Enter this recipe I had seen for Scottish pancakes. I had made them once, but while they were delicious, I was not satisfied with their height. Which isn’t to say that they weren’t fluffy, it’s just that if you take a look at the original blog post, you’ll see that they are ridiculously tall! The author used a biscuit cutter to shape them in the pan. Since I didn’t have a biscuit cutter, I decided to get round silicone egg molds and try again. This admittedly took a while before I got around to it, and in the end, I don’t think the molds are worth it, because the pancakes just won’t puff up like in the original post (though it looks like she used all the batter to make 3 pancakes, so obviously her molds are much taller than mine!). The pancakes are delicious either way (though I omitted the cinnamon the second time and prefer them like that, so that’s what I’m writing below). I got 12 little pancakes, and would consider just doubling the recipe next time. I think these are my favorite easy pancakes to make! I haven’t tried combining this recipe with The Kitchn’s tip for tender diner-style pancakes, but let me know if you do!

In a mixing bowl, whisk together flour, baking powder, salt, and sugar.

In another bowl, combine eggs and milk and whisk vigorously until eggs are foamy.

Whisk the dry ingredients into the wet ingredients until just combined. Set aside for 15 minutes.

Put a teaspoon of butter, margarine or oil in a pan and melt over medium heat. Drop a ladle-full of batter into the pan and cook until it starts to rise up and bubble; flip over and continue to cook until golden brown. Remove from the pan and keep warm while repeating with the rest of the batter, greasing the skillet again as needed.

Serve warm with syrup and fresh berries, if desired. 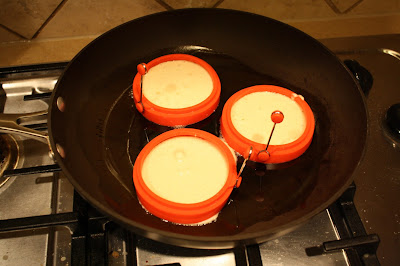 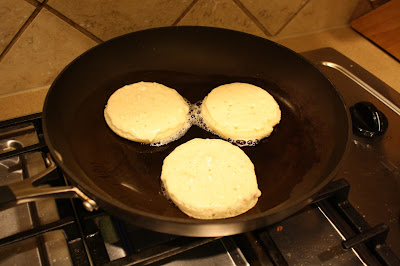 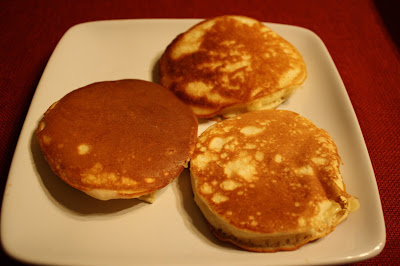