Ginger Ale Crêpes with Chocolate Chips, and a new technique

I made crêpes for Candlemas again, and one of these days the Engineer will get on board. (Maybe it will be the year I make the extra effort to have both savory and sweet ones, because right now ham and cheese and béchamel on buckwheat just seemed like more than I could handle.) At least the Little Prince liked the idea this year! I made two recipes. One was from America’s Test Kitchen and, while the recipe itself was a bit of a dud (the flour clumped, the batter didn’t get a rest, and the taste didn’t impress me that much), the technique was stellar. It’s all about heating the pan properly, and it’s more effort than I normally put in, but I have to say that it paid off – even the first crêpe was perfect!

The technique is this: place ½ tsp. of oil in a 12-inch nonstick skillet and set it over low heat for at least 10 minutes. Then, wipe out the skillet with a paper towel, leaving only a thin film of oil on the bottom and sides. Increase the heat to medium and let the skillet heat for 1 minute. Test the skillet by placing 1 tsp. of batter inside and turning it over after 20 seconds. If the bottom is golden brown, you’re good to go; if the mini-crêpe is too light or too dark, adjust the heat accordingly and test again. They then recommend using ¼ cup of batter for each crêpe, tilting the pan back and forth and shaking it gently so that the batter covers it evenly.

The other recipe was for ginger ale crêpes with chocolate chips. They also contained orange zest and coconut milk, and while the first was a great addition, the latter made the batter too thick for my liking – I think coconut milk beverage would be a better option, or perhaps half coconut milk and half lactose-free milk.

In a food processor or blender, mix flour, salt, eggs, milk, and butter until totally blended into a thin batter.

Pour into a bowl with ginger ale and orange zest and mix (I did this in the blender too). Cover and let sit in fridge for at least an hour.

Heat crêpe pan (see technique above), adding more butter. Pour a circle of batter into the pan. When the crêpe has browned slightly on the bottom, carefully work a spatula underneath it and flip. Cook the second side briefly, just to set the batter. Continue with remaining batter. Serve crêpes as they come off the heat, sprinkled with about a tablespoon of chocolate chips. 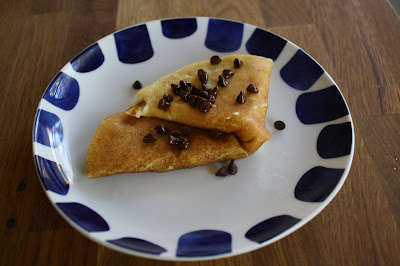 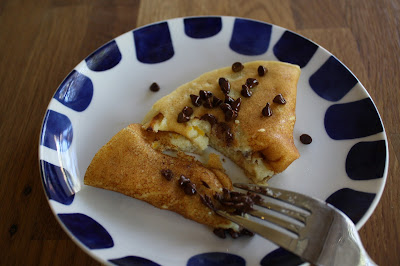