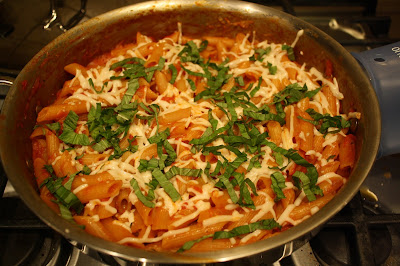 I’m back, after a little post-holiday hiatus. This time, I’d like to share an easy recipe from Serious Eats, which my friend Jen shared. The pasta is cooked by adsorption using chicken broth, though you could use vegetable broth instead. The yield is smaller than the recipes I normally post: you’ll probably get only 4 small servings out of this. That being said, it was really good, so I wouldn’t hesitate to make it again.

Adjust oven rack to center position and preheat the oven to 400 °F.

Heat the oil in an oven-safe 12-inch skillet over medium-high heat until shimmering. Add the garlic and chili flakes and cook, stirring constantly, until fragrant but not browned, about 30 seconds. Add the tomatoes and a pinch salt and reduce the heat to maintain a gentle simmer, breaking up the tomatoes with a potato masher as they soften until the sauce has thickened, about 10 minutes. Add broth and bring to a gentle simmer.

Add the pasta and cover. Raise the heat to medium, making sure there are active and vigorous bubbles. Cook, stirring occasionally to make sure the pasta isn’t sticking, until the pasta is just firm, following package directions for timing (12 to 15 minutes).

Remove lid, season to taste with salt and pepper, stir in the parmesan, and spread the mozzarella on top (a few stray chunks of mozzarella never hurt). Transfer to oven and bake until cheese has melted and is starting to brown, 8 to 10 minutes. Top with basil and serve. 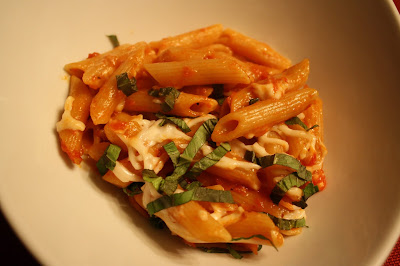