I’m not sure how seasonal pumpkin is for me at this point. Sure, nothing says “fall” like the return of pumpkin-everything on store shelves, but I always buy canned pumpkin purée, and that’s available year-round… I’ll concede that it usually feels warm (either the pumpkin itself or the spices associated with it), so I’d prefer it in the winter than in the summer. Do I say that every time I post pumpkin recipes now? Should I assume all my readers have heard me say that? In any event, I tried a recipe from Petit Lapin, chocolate and pumpkin pots de crème, but none of us were crazy about it (we much preferred the chocolate and sweet potato purée I had made once, and that’s the same general idea).

These pumpkin cupcakes, though, were a nice experiment. They were definitely not sweet, as they are only sweetened with coconut sugar. That being said, I had reduced the amount of vanilla bean paste to 1 teaspoon, because 1 tablespoon seemed like an obscene amount; in hindsight, the cupcakes would have been more flavorful (and would have given the illusion of being sweeter) had I used the full amount. The crumb was moist in a very pleasant way, though. I also tried Dollop frosting, which is vegan and soy-free and also barely sweet. It’s made with sustainably-sourced palm shortening, and the fat was more noticeable than the sugar. It was too stiff right out of the packaging, so I took it for a spin in my stand mixer and that helped the consistency as well as the mouthfeel. Even though it really wasn’t as sweet as most frosting I’m used to, it was somewhat addictive. 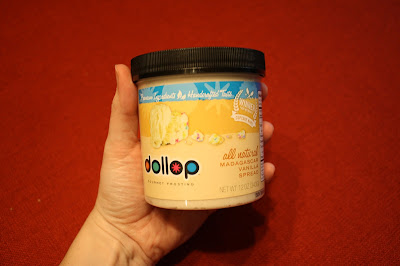 The original recipe called for Bob’s Redmill’s all-purpose gluten-free flour, but I used white whole wheat flour, since wheat isn’t an issue for me and I didn’t have all-purpose gluten-free flour on hand. The yield was supposed to be 10 muffins, and that’s indeed what I got. I’m a little annoyed that it’s not an even dozen, but there you go. That means you can have a few spoonfuls of frosting straight out o the package and still have enough to frost all the cupcakes – silver lining!

Preheat your oven to 350 °F. Line or spray your muffin pan and set aside (this recipe yields 10 cupcakes).

In a medium bowl, whisk the dry ingredients (from flour to nutmeg). Set aside.

Into a stand mixer with paddle attached (or in a bowl with a whisk, really, since there’s nothing to cream), beat the almond milk, pumpkin, vanilla, melted margarine and cider vinegar until combined.

Add the dry ingredients into the wet mixture and beat blend until combined. Scrape the sides down and blend one more time. (I did all this by hand with a wooden spoon.)

Fill each muffin cup about 60% full (I like doing this with an ice cream scoop). Bake for 20-24 minutes or until a toothpick inserted in the center comes out clean.

Once cooled, frost as you wish. 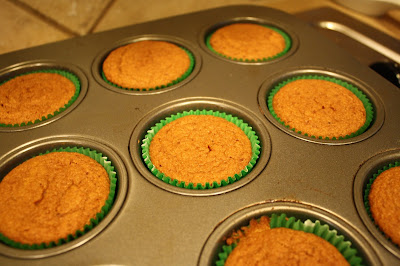 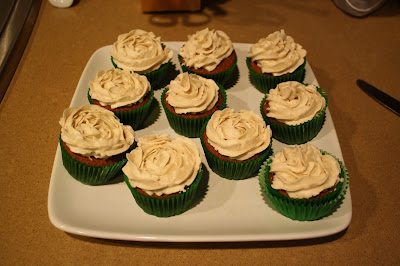 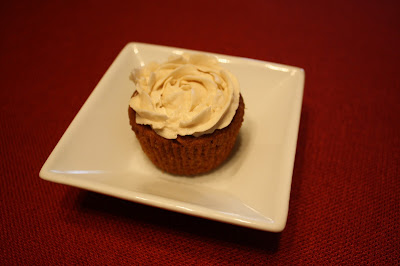 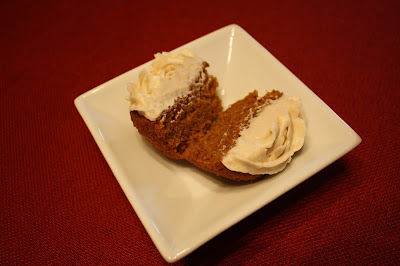