Latkes with starch, from scratch 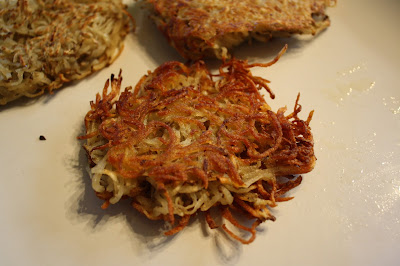 As always, I have a lot of posts to catch up on. I meant to post an article from The Atlantic last month all about how un-traditional potato latkes actually are. It turns out that, hundreds of years ago, latkes were made with cheese, then with grains. People used schmaltz before they used oil, and latkes weren’t associated with Hanukkah until more. It’s a very interesting article, if you have time for it.

So this year, I tried a new latke recipe for Hanukkah. Not the squash latke recipe I posted about during Hanukkah, but a potato recipe I made during that time and never got around to posting. Look at this as a very early post for the next Hanukkah, alright? The basic principle is outlined in this article on The Kitchn, but the recipe below is from Cook’s Illustrated. Basically, when you squeeze the water out of the grated potatoes, you let the water rest so that the starch collects at the bottom. The water is then carefully poured off, while the starch is added back into the potato mixture, making for crispier latkes. The starch acts as a binder, and this recipe doesn’t even contain flour, so it’s gluten-free (yet I didn’t have any trouble with latkes falling apart).

Both sources I linked to above recommend hand-grating the potatoes (because the food processor tends to make longer strands, which interfere with the proper latke consistency), but I really didn’t feel like it. I parent a toddler, I deserve to use my food processor here, and so do you. Instead, I cut the potatoes in 2-inch chunks to make sure the shreds wouldn’t be too long. Also, I forgot the parsley. The latkes were delicious nonetheless!

Toss potatoes, onion, and 1 teaspoon salt in bowl. Place half of potato mixture in center of dish towel. Gather ends together and twist tightly to drain as much liquid as possible, reserving liquid in liquid measuring cup. Transfer drained potato mixture to second bowl and repeat process with remaining potato mixture. Set potato liquid aside and let stand so starch settles to bottom, at least 5 minutes. (I had about 1 cup of liquid, which yielded roughly 1/8 cup of starch in the end.)

Cover potato mixture and microwave until just warmed through but not hot, 1 to 2 minutes, stirring mixture with fork every 30 seconds. Spread potato mixture evenly over second rimmed baking sheet and let cool for 10 minutes. Don’t wash out bowl.

Set wire rack in clean rimmed baking sheet and line with triple layer of paper towels. Heat ¼-inch depth of oil in 12-inch skillet over medium-high heat until shimmering but not smoking (350 °F, if you want to bother measuring it). Place ¼-cup mound of potato mixture in oil and press with nonstick spatula into 1/3-inch-thick disk. Repeat until 5 latkes are in pan. Cook, adjusting heat so fat bubbles around latke edges, until golden brown on bottom, about 3 minutes. Turn and continue cooking until golden brown on second side, about 3 minutes longer. Drain on paper towels and transfer to baking sheet in oven. Repeat with remaining potato mixture, adding oil to maintain ¼-inch depth and returning oil to 350 °F between batches. Season with salt and pepper to taste, and serve immediately. 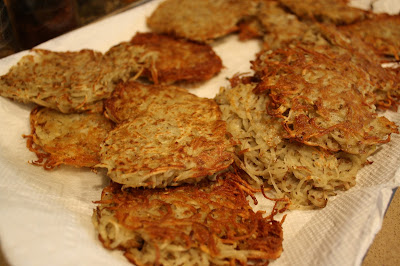 If you want a seasonal dessert, consider apple latkes with caramel sauce and lactose-free sour cream! 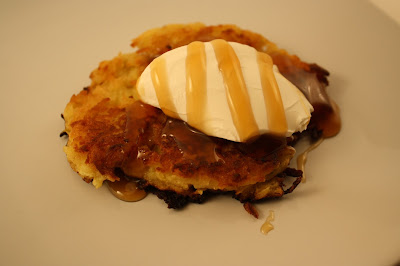 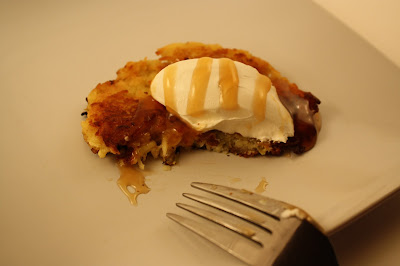 We were not home for Hannukah this year so we didn't make latkes. :(
Yours look great! I wanted to try that recipe and see if it's worth the extra effort of letting the starch settle.

Thanks! Honestly, it was much less of a hassle than I thought. I'd make them again.