Squash with White Beans and Bacon 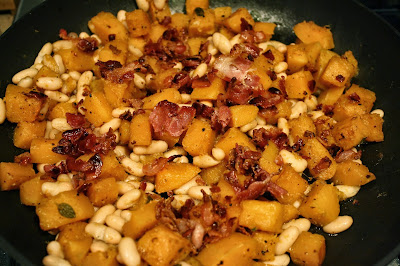 I’ve said before that squash is hit or miss with the Engineer. I never really know in advance how he’ll react to a dish, either. For example, I had made baked spaghetti squash carbonara, thinking that bacon would make everything better. After all, who doesn’t like a carbonara? Well, apparently, the Engineer. Too bad! I tried again with a Real Simple recipe for pumpkin with white beans and bacon. I couldn’t find any sugar pumpkins, so I used the familiar butternut squash instead, and this time, the Engineer really liked it. Success! Now if only this recipe had convinced the Little Prince to eat beans…

Cook the bacon over medium heat until crisp, 6 to 8 minutes. Transfer to a plate with a slotted spoon; let cool, then break into pieces. Reserve the skillet. 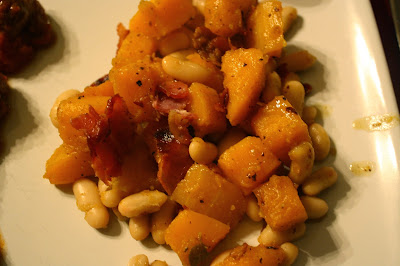