Alright, so it’s not Thanksgiving itself that was belated, just my post. I don’t know where time goes, but apparently it took me over a month to get this online, so there you go. Come to think of it, maybe this is just a really early Thanksgiving post, to give you over 10 months to prepare? Yeah, I’ll just keep telling myself that. In any event, we were 3 adults and 1 not-quite-toddler, so we bought a roasted chicken instead of making a turkey – this was a good thing, because the oven was full of three side dishes, and there wouldn’t have been any room for turkey anyhow! It’s true that the sides could be made ahead of time and warmed in the oven while the cooked turkey is resting, though, so I’ll keep that in mind when I make these again. So, the line-up this time: candied sweet potatoes; mashed potato casserole; cornbread, sausage and pecan dressing; roasted chicken; maple-apple cranberry sauce; and chocolate pomegranate torte. I won’t post the recipe for the maple-apple cranberry sauce because it wasn’t great, and I definitely prefer my usual cranberry sauce with orange and ginger. As for the chocolate pomegranate torte, here is the recipe in French. 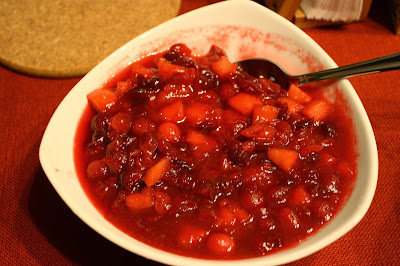 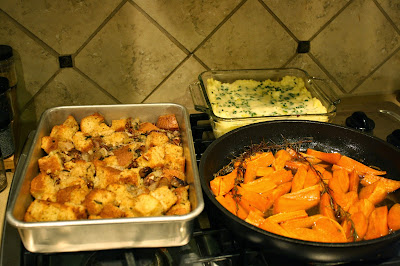 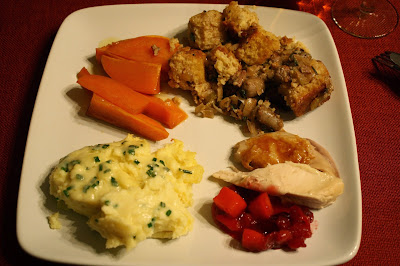 The candied sweet potatoes are a recipe I’ve had for a while, but I believe I’ve never posted it. As far as I can remember, it’s from an old issue of Martha Stewart Living, but I can’t find it on the website. It’s one of my favorite ways to eat sweet potatoes, and it tends to be a success even among those (*cough* the Engineer *cough*) who don’t normally like them. It’s a very easy recipe, too, mostly hands-off, though the baking time is long.

Preheat oven to 375 °F.
Toss potatoes with cider and syrup; season with salt.
Transfer potato mixture to a large cast-iron or other heavy oven-proof skillet, layering the wedges. Dot with small pieces of butter. Transfer skillet to oven.
Bake potatoes, tossing carefully about halfway through, until browned on edges and very tender, about 1 ½ hours. 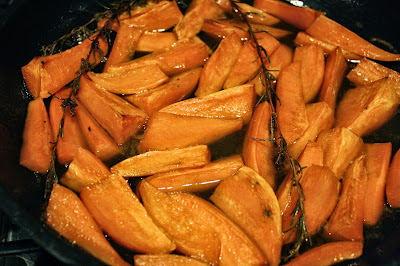 The mashed potato casserole was created by Art Smith when he was still Oprah Winfrey’s personal chef; this recipe was presented on her show over 10 years ago, so again I didn’t find it on her website. The episode was titled “Art Smith Teaches Men to Cook” and judging by the now-defunct URL on my printout, it aired on Valentine’s Day 2003. I printed it a month later (and the reverse side of the page is from a journalism project I was doing for a university course, so that doesn’t make me feel any younger!), and I set it aside initially because it’s meant for 10 to 12 people – and I never serve that many – and then later because it has lactose. But I ended up halving the recipe and using vegan cream cheese, and it was fabulous, probably my favorite dish of the meal. Now that I know Green Valley Organics makes lactose-free dairy cream cheese, I could even make the original version! The recipe below serves 5-6 people as a side.

Position rack in the center of oven and preheat to 350 °F. Butter an 8x8 baking dish.
Place the potatoes in a large saucepan and add enough lightly salted water to cover by 1 inch. Bring to a boil over high heat. Reduce the heat to medium-low. Simmer until the potatoes are tender, about 15 minutes. Drain and return to pot.
Mash the potatoes until chunky with a hand-held electric mixer (I did this by hand). Add the cream cheese, ¾ of the cheddar cheese, milk, butter, salt and pepper to taste and mix until smooth. Stir in the chives (I forgot, so I used them as topping only). Spread evenly in baking dish and top with remaining cheddar.
Bake until the cheese is melted and the casserole is heated through, about 30 minutes. Serve hot. (The casserole can be prepared, without the cheese topping, up to 1 day ahead, covered, and refrigerated. If chilled, add the cheese topping and bake until heated through, about 45 minutes.)


As for the dressing (which I prefer to stuffing, since I like baking it outside the turkey anyway for safety reasons), I knew I had a winner on my hands with cornbread and sausage! The Engineer concurs. The recipe is from Bon Appétit. I’d consider adding an apple or a pear to the mix next time, even though it was good as is. I used store-bought cornbread, but you are free to make your own.

Arrange racks in upper and lower thirds of oven; preheat to 250 °F. Butter a 13”x9” baking dish; set aside. Scatter cornbread in a single layer on 2 rimmed baking sheets. Bake, stirring often and rotating sheets halfway through, until dried out, about 1 hour. Let cool. Transfer to a very large mixing bowl.
Meanwhile, cook sausage in a large skillet over medium-high heat, breaking up into ½-inch to 1-inch pieces with a wooden spoon, until browned, 8-10 minutes. Transfer to bowl with cornbread but do not stir.
Heat ¾ cup butter in same skillet; add onions and celery and cook, stirring often, until softened and just beginning to brown, about 10 minutes. Add to cornbread in bowl.
Return skillet to heat. Add vinegar; cook, scraping up browned bits from bottom of pan, for 1 minute. Pour into bowl with cornbread. Gently fold in 1 ½ cups broth, pecans, if using, parsley, sage, rosemary, and thyme. Add salt and pepper. Let cool.
Preheat oven to 350 °F. Whisk 1 ½ cups broth and eggs in a small bowl. Fold gently into cornbread until thoroughly combined, taking care not to mash cornbread (mixture will look wet). Transfer to prepared dish, cover with foil, and bake until an instant-read thermometer inserted into the center of dressing registers 160 °F, about 40 minutes (no need to measure exactly if you use pasteurized eggs). The dressing can be made 1 day ahead; let cool, cover and chill.
Bake dressing, uncovered, until set and top is browned and crisp, 40-45 minutes longer (if chilled, add 10-15 minutes). 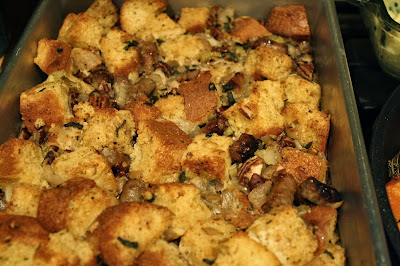 We should definitely do a Thanksgiving-style meal at Summerfest this year...