These popovers turned out great, but I was afraid they wouldn’t. I was so ambivalent about this Doughmesstic recipe as I was making it that I had actually decided to change the instructions completely, but the result ended up so surprisingly good that I revised my position! You see, the original recipe was for 6 popovers, and I somehow assumed that the baker was using a regular muffin tin, as most people do. But in retrospect, I think she was using actual popover mold, which has a greater capacity than muffin molds. I made it in a regular muffin mold, but I felt like a) it used too much oil, and b) there was too much batter. So after melting margarine in 6 tins for the recipe, I ended up greasing 2 more tins, in desperation, to make muffins from the same batter. I thought they would turn out really well, because the 6 popovers looked like a disaster waiting to happen – too much oil in the tin and batter that looked like it would overflow. (I’m including a blurry photo so that you can see what I mean. Note that in all the photos, the popovers are on the left and the muffins are on the right. You’ll notice how much higher the popovers had risen when they were fresh out of the oven!) 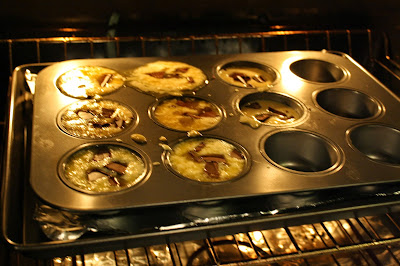 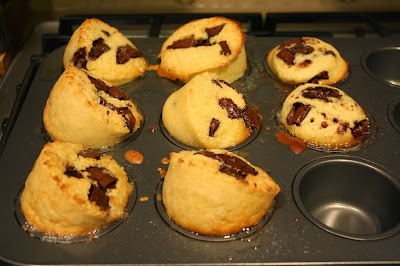 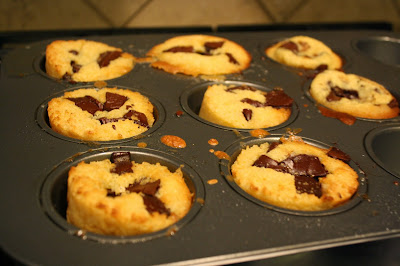 However, once baking was done, the muffins had absorbed WAY too much chocolate. This doesn’t initially sound like a problem, really, but the chocolate had changed consistency and had become grainy, which ruined the batter and just made the muffins unpleasant to eat. The popovers, meanwhile, were nice and moist and, most surprisingly, not greasy! It’s possible the coconut flour is responsible for this. So I’m only making two changes to the recipe: grease 9 tins instead of 6 (the amount of margarine has been adjusted accordingly), and place the muffin tins on a baking sheet just in case there’s spillage. If you have popover molds, use those and make 6 instead of 9. Otherwise, trust that the recipe will work for 9 popovers baked in a muffin tin!

¾ cup all-purpose flour
1 pinch salt
¼ cup coconut flour
¼ cup shredded coconut
3 eggs
1 1/3 cup lactose-free milk
¼ cup sugar
2 tsp. vanilla
4 oz. dark chocolate chunks (or ½ cup in the original recipe, but a weight was easier for me)
4.5 Tbsp. margarine or butter (I might round down to 4 Tbsp.; or 3 Tbsp. for 6 popover tins)

Preheat oven to 375 °F. Divide the margarine evenly into the cups of your popover pan or muffin tin. Place the pan on a baking sheet and put it in the oven for 3-5 minutes while you are making the batter.

In a small bowl, whisk together the flour, salt, coconut flour and shredded coconut.

In medium bowl, beat the eggs with the milk, vanilla, and sugar, then whisk in the dry ingredients. Pour the batter into the margarine-filled cups. Add a few chocolate chunks to each batter-filled cup. Return to oven for 5 minutes, then reduce the temperature to 350 °F and continue to bake for another 20 minutes. Let cool a bit before serving. (The popovers do deflate, but they are still delicious.) 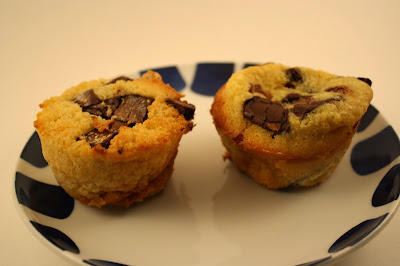 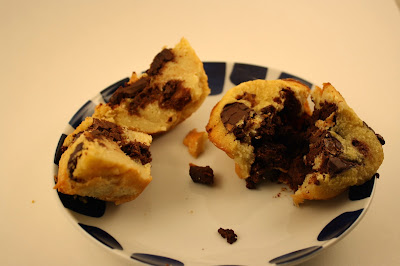 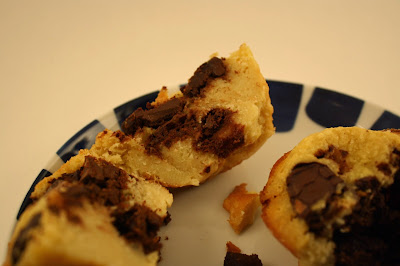 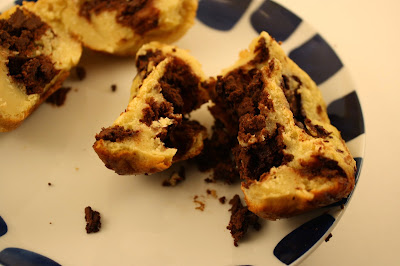