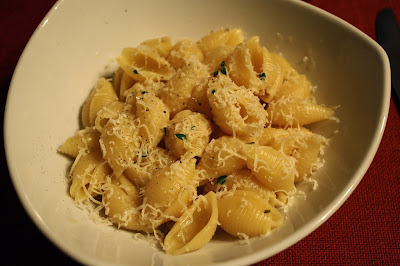 I had been saving my parmesan rinds in the freezer for a while, because sometimes I like to make a recipe that calls for throwing a rind in a pot of soup to enhance the flavor. The thing is, though, I haven’t made recipes like that for months and months, so my stash of parmesan was starting to overflow. When I saw this recipe for parmesan broth in Bon Appétit, I decided it was providence. To my surprise, though, I only had about half a pound of rinds, instead of the full pound called for… So I ended up halving the recipe and using the broth to make a pasta dish loosely adapted from their capellini en brodo and I had enough for one meal (2 generous servings). I wish I’d had more, though, because it was so good that I may or may not have slurped the broth from the bottom of my bowl once I was done! The pasta absorbs a lot of the flavor of the parmesan when it cooks in the broth, and the liquid gets thickened slightly from the starch in the pasta – it’s win-win. I’m now hoarding my parmesan rinds once more… The recipe below makes about 4 cups of broth, which you can use to cook about 4 servings of pasta.

Heat oil in a large saucepan over medium-high heat. Cook onion, garlic, thyme, bay leaf, parsley, and peppercorns, stirring often, until garlic is deep brown, about 5 minutes. Add wine, bring to a simmer, and cook, scraping up any brown bits, until liquid is reduced by half, about 4 minutes.

Add parmesan rinds and 8 cups water; bring to a boil. Reduce heat and simmer, stirring occasionally to prevent cheese from sticking to bottom of pot, until broth is flavorful and reduced by half, about 2 hours.

Strain through a fine-mesh sieve into a large bowl (or an airtight container if making ahead).


I used the broth to cook pasta by adsorption, so I must have had something like 8 oz. of pasta for 2 cups of broth. That being said, you could also make it “in brodo” (in broth) by using about 2 oz. of pasta for 2 cups of broth. This depends a little on the shape of the pasta – I used shells, because they are easy to grab for little fingers. You can also let the amount of pasta you use determine how much broth is left to serve in the plate. Top with grated parmesan, a few thyme leaves and freshly cracked black pepper. 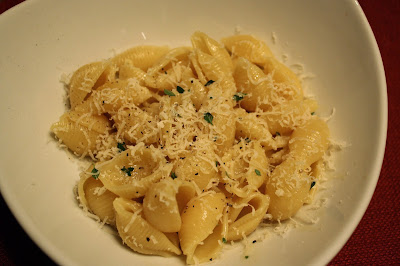 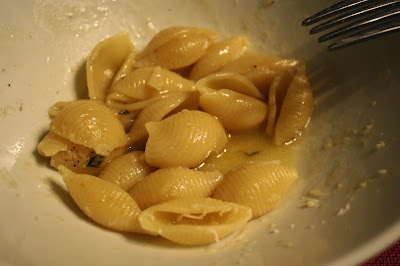 I wonder if my cheese store would sell me some rinds?

I actually saw them for sale once! I didn't buy any because they were the same price as the whole wedge (per pound). I felt like they should have been at a discount...