I tried a few kinds of pancakes recently. The first was a grain-free pancake made with coconut flour, but I didn’t like it and won’t be making it again. I think I like coconut flour best when it’s combined with other flours, not on its own… The other two were big hits, though, so I want to share the recipes. They happen to be gluten-free, but that’s somewhat of a coincidence. I think that the reason they tasted so good was that they had all these different grains in it, as opposed to just wheat, so flavors like corn and buckwheat and oat really made them stand out. The first recipe, Blackberry Farm Griddle Cakes, is from the RSVP section of Bon Appétit. The first batch was what I call “the dog’s pancakes”, because they fell apart, but once the skillet was seasoned after that, it was a breeze. And we both loved them! I think it yielded something like 18 pancakes.

Whisk buttermilk mixture into dry ingredients, then whisk in butter until no lumps remain.

Heat a large nonstick or cast-iron skillet over medium heat; lightly brush with oil. Working in batches, pour batter by scant ¼-cupfuls into skillet. Cook until bottoms are browned and bubbles form on top of griddle cakes, about 3 minutes. Flip and cook until griddle cakes are cooked through, about 2 minutes longer. 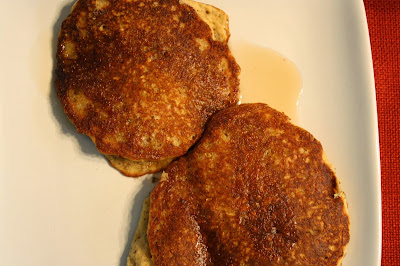 The other recipe was printed on my box of Ancient Harvest quinoa flour. It was also delicious, and didn’t have the caveat of “dog pancakes” on the first go-round. I really loved these. The recipe yields 10 to 12.

In a large bowl, mix together the dry ingredients. In a small bowl, mix the vegetable oil, buttermilk and egg. Add the wet ingredients to the dry and mix until combined.

Pour about ¼ cup of batter onto prepared griddle (I used vegetable oil in a pan set over medium heat). Turn cakes as soon as they are puffed and full of bubbles, but before the bubbles break. 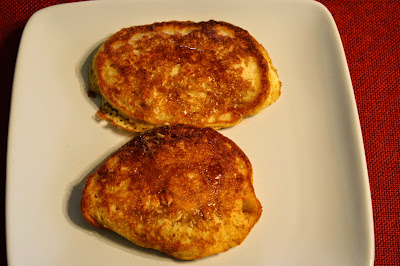