I gave the pumpkin ice cream I talked about another go, using arrowroot starch this time to get a better consistency, like I had successfully done with my coconut sorbet. The result was promising as I cooled the mixture before freezing it, but once frozen, it was rock hard again. So when I adapted the recipe for Bon Appétit’s honey rosemary ice cream, I used a Serious Eats article shared by my friend Jen: How to make great vegan ice cream.

The main things I hadn’t been doing before were to make sure the fat content was high enough and to use a liquid sweetener. In this case, the sweetener is honey, so I left that as is (since there was no sugar to swap out for corn syrup). The original recipe also called for 2 cups of heavy whipping cream, so this time I decided to use coconut cream, not coconut milk (though I also used coconut milk instead of cow’s milk). Coconut cream is not to be confused with creamed coconut or cream of coconut, as all these are different things (and Lord knows the linguist in me wishes there would just be clearer terms!). I used Chao Thai coconut cream powder; I know I’ve bought small cans of coconut cream before, but this time I could not find them anywhere. The directions on the package were confusing, because they differed in French and in English (dissolve 1 pack into 1 bowl or 1 cup, respectively, although both specified 150 ml); I ended up using 2 packages and 250-ml cups. And just now as I’m typing this, I see a note on the package (separate from the directions) that says to use 80 ml of water for thick cream and 240 ml for thin cream… Oy! The other thing to note is that I also used 1 can of coconut milk, but this time it was Thai Kitchen instead of Goya. This really made a big difference: Thai Kitchen has guar gum as a stabilizer, and a much thicker consistency than Goya. Come to think of it, that’s probably why my coconut sorbets had worked back when I lived in Montreal, even without coconut cream…

So, not only was the consistency fine this time, and perfectly scoopable right out of the freezer, the taste is wonderful, too. Honey and rosemary is a great combination!

Whisk yolks and sea salt in medium bowl. Gradually add hot cream mixture; whisk until blended. Return custard to same saucepan and stir over medium-low heat until custard thickens slightly and coats back of spoon when finger is drawn across and instant-read thermometer inserted into custard registers 165 °F to 170 °F, 4 to 5 minutes (do not boil). Note that I use pasteurized eggs, so I don’t bother checking the temperature, only the consistency. Strain into medium bowl. Set bowl over larger bowl filled with ice and water; stir occasionally until cool, about 10 minutes. Remove bowl from ice and water. Cover custard with plastic wrap and chill at least 4 hours. 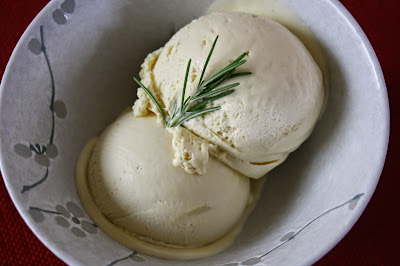