Tuna Tartare with Avocado and Radish 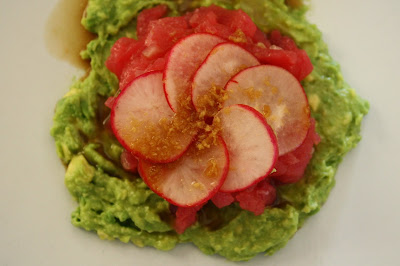 Last time the Engineer and I were at Central Market, I bought some frozen sushi-grade tuna to make this recipe from Bon Appétit, which had been sitting in my folder for a while (because good tuna is hard to come by). I changed the recipe a bit by adding more avocado (2 instead of 1), and next time I would also use less dressing. As it is, the recipe serves 4, though you should consider a side (like this potato salad, which the Engineer thought went really well with the tuna). It’s nice to have something like this at home every once in a while, especially now that we don’t go out as much as we used to!

For the dressing
Combine lime zest, lime juice, sugar, and 2 Tbsp. water in a small saucepan. (Alternatively, pulse lime leaves and sugar in a spice mill until a coarse paste forms, then add to pan with juice and water.) Bring to a boil; remove from heat. Cover and let cool completely. Strain through a fine-mesh sieve into a medium bowl.
Whisk in soy sauce, vinegar, and ginger to lime mixture to blend.

For the tuna
Toss tuna with 1 Tbsp. olive oil in a medium bowl; add chile and shallot; season lightly with salt. Scoop avocado flesh into another medium bowl; mash with remaining 1 Tbsp. olive oil. Season with salt.
Divide avocado among small bowls. Top each with some tuna mixture, then ¼ of the radish slices. Spoon dressing over avocado and drizzle radishes lightly with chili oil. 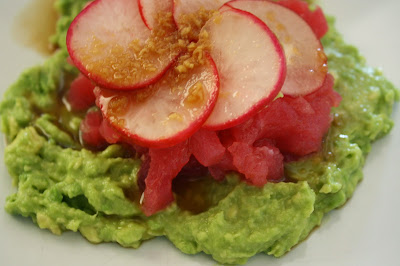 I just want to reiterate that the appearance of this dish has not been altered or doctored in any way - they actually looked that delicious and awesome when I looked down at my plate.