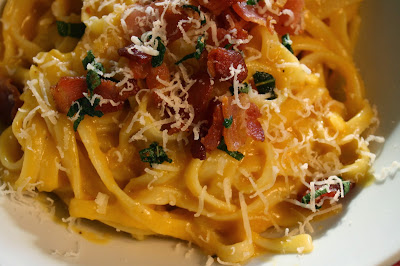 I had recipes bookmarked for two kinds of pastas with squash sauce: a squash carbonara from Bon Appétit and a squash alfredo from Post Punk Kitchen. It turns out that while I prefer the method of the latter, I liked the former best. The alfredo, with its white wine and miso and sliced onions, was somewhat unremarkable. Plus, the cashew cream it called for made the sauce almost too thick. That being said, I found it easier to work with roasted, puréed squash, perhaps because it’s relatively hands-off to make and it’s something I could do earlier in the day and have ready to go when it was time to make dinner. Of course, one could use that method to make the carbonara pasta, and that dish could also be made vegetarian by omitting the bacon and using vegetable broth instead of chicken. I share my adaptation of that recipe below, because it was really, really good.

Heat oil in a large skillet over medium-high heat. Add pancetta, reduce heat to medium, and cook, stirring occasionally, until crisp, 8–10 minutes. Add sage and toss to coat. Using a slotted spoon, transfer pancetta and sage to a small bowl; set aside.

Add squash, onion, and garlic to skillet; season with salt and pepper and cook, stirring occasionally, until onion is translucent, 8–10 minutes. Add broth. Bring to a boil, reduce heat, and simmer until squash is soft and liquid is reduced by half, 15–20 minutes. Let cool slightly, then purée in a blender until smooth; season with salt and pepper. Reserve skillet. (The purée can be made ahead of time; simply cover and chill. Note that I had too much purée, because I used the whole squash; I froze some for future use.) 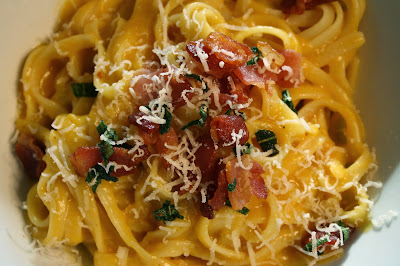 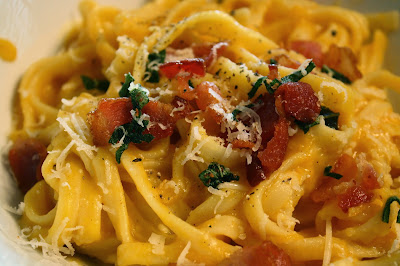