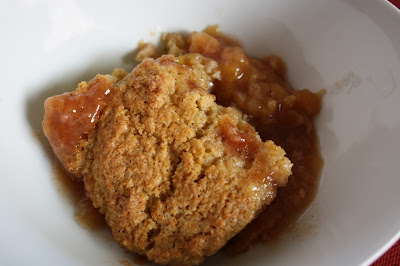 I wasn’t sure I’d post this recipe. I had almost decided not to, because while it was good, it came out very homely-looking. I mean, it’s not like cobblers have ever won beauty pageants anywhere, but I had made this recipe before and I remembered much prettier results. But you see, I found out this week that someone very dear to me had passed away. My aunt Catherine (who was really my great-aunt, but was closer to me than my actual aunts, with the possible exception of my Fairy Godmother) loved fruit-based desserts. In fact, I wouldn’t have been surprised if she had thought the homelier, the better. I can’t remember whether I had shared that recipe with her already, but I know she would have enjoyed it.

The recipe is originally from a 2003 issue if the LCBO’s Food and Drink. I had it in French, but as I look now at the original English version, I realize that one thing I was going to warn you about (don’t leave the rhubarb on the stovetop more than a few minutes at most) is actually very clear in English and was completely mistranslated in French, which is why my rhubarb turned to compote without any big pieces left… So this version should clear things up; just try not to let your rhubarb dissolve. Also, note that the amount of sugar is fine if your rhubarb is very bitter, but some varieties are sweeter than others, so don’t be afraid to taste yours and adjust the amount of sugar accordingly.

For the cobbler
6 cups rhubarb (diced, see below)
1 ½ cups granulated sugar (see note above)
3 Tbsp. cornstarch
1 vanilla bean (to gather seeds, cut vanilla bean in half with the point of a knife and scrape out seeds)
½ tsp. cinnamon
½ tsp. Chinese 5-spice powder (I was out and used allspice instead)
2 Tbsp. water
2 Tbsp. unsalted butter or margarine

If rhubarb stalks are thick, peel away the outside with a paring knife. Dice rhubarb and place in a saucepot.

Combine sugar with cornstarch, the scraped seeds from vanilla bean, cinnamon and Chinese 5-spice powder. Add to rhubarb and stir in with water. Bring just up to a boil, stirring on occasion and pour into a 4 cup (1 L) baking dish. Dot fruit with 2 Tbsp. butter.

Melt butter and warm milk to room temperature and combine. Whisk egg into milk mixture and pour over flour. Stir just until batter is evenly incorporated-it will look like thick pancake batter.

Spoon cobbler topping over rhubarb, leaving spaces between spoonfuls for the topping to expand.

Bake for 30 to 35 minutes, until the cobbler looks cake-like underneath when a center piece is lifted (I used a toothpick to gauge whether it was cooked through). Serve warm, with a generous scoop of lactose-free vanilla ice cream if you wish. 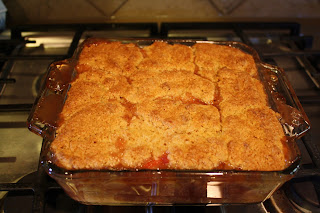 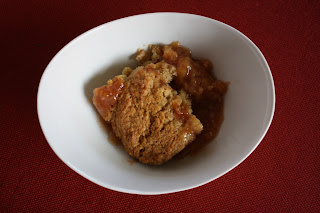 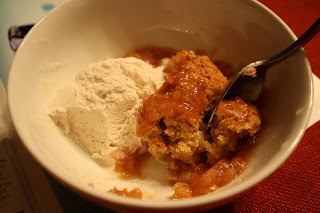 Can't wait for rhubarb to come in season here! I'm going to make some rhubarb jam (from my canning book "put 'em up") and some rhubarb pie (http://sweets.seriouseats.com/2012/04/pie-of-the-week-rhubarb-pie.html). I made this pie last year and it was fantastic!

Looks good! The ingredients seem similar to Molly Wizenberg's rhubarb pie (though she also adds orange zest), but I think your recipe has more rhubarb to less sugar than hers... http://www.lactosefreegirl.com/2010/08/rhubarb-pie-or-how-molly-wizenberg.html
Molly's pie rocked, I should try to make it again this spring.

Hi! I love how informative and great your articles are. Can you recommend any other Food Blog Names or blogs that go over the same topics? Thanks a lot!