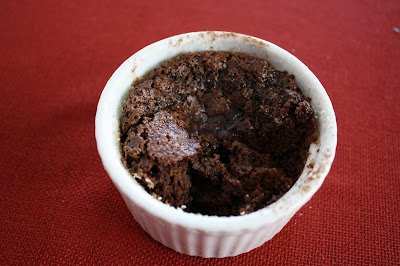 I’ve had a weird track record with gluten-free brownies. While I’ve made some before with success, the last three have been failures. There was a recipe by David Lebovitz, where he uses corn starch instead of flour, but those came out too thin, too fudgy, too sweet even though I had used 70% chocolate, and they didn’t hold well together (though they tasted good). I wondered whether I should try again by replacing half the corn starch with cocoa powder and doubling the recipe, but decided to abandon it. Then I tried these brownies, which called for all-purpose gluten-free flour – I used Bob’s Red Mill’s mix. The center of the brownies caved in substantially; the edges were rock-hard and inedible, and while the center was chewy and dark and rich without being sweet (delicious, in fact), with a crispy top, the brownies as a whole were a failure. While eating them, I felt like I’d been bad at Christmas and had gotten a lump of coal to eat. And then I tried a recipe from Chatelaine: as commenters had pointed out, these brownies look nothing like the picture that goes with them. The batter was super thick and the brownies were gummy. No good.

It must have been a leap of faith, then, that allowed me to try these gluten-free Mexican chocolate cakes not once, but twice. The first time I made this recipe, from Gluten-Free Girl and the Chef, I changed the spices a bit and used lactose-free cow’s milk. The unpredictable result was a massive failure, because the little cakes exploded out of their ramekins! What was left in them was good, though, so I decided to make this again with soy milk, as in the original recipe. I’m including a blurry picture because it’s just really funny to see, along with what I salvaged from one of the ramekins. 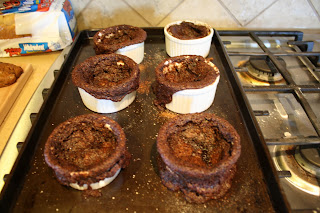 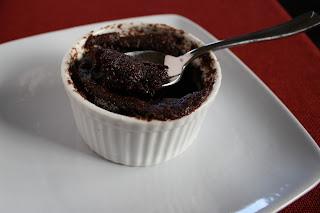 So the second time, I made them vegan, and used less sugar, too. And now, they’re keepers! I ended up cooking them a bit more the second time, but they were good with some moisture left as well, so it’s totally up to you. You can top them with lactose-free whipped cream or serve them as is.

For the sweet rice flour, what I did was use a spice grinder to pulse sweet rice into flour (I like having sweet rice in the pantry, but did not want to have a third kind of rice flour, so I just make my own). If you do the same, don’t be afraid to really pulse the heck out of it so that it is more powdery than grainy. Note also that for the topping (4 Tbsp. sugar + 2 Tbsp. cocoa), you’ll have too much for the recipe. I think I used about half, and ended up using the rest to make chocolate milk. I wouldn’t hesitate to cut that in half next time.

Preheat the oven to 350 °F. Grease and flour 6 ramekins (to keep this gluten-free, use more sweet rice flour, or cocoa powder). Put the ramekins on a baking sheet covered with aluminum foil.

In a measuring cup, mix the soy milk, oil and vanilla. Pour the mixture into the dry ingredients (don’t worry if the batter feels a little stiff). Spoon the batter into the ramekins, filling them about 2/3 full.

Combine the remaining sugar and cocoa powder and sprinkle it evenly over the tops of the ramekins. Spoon 2 Tbsp. of boiling-hot water into each ramekin – do not stir.

Slide the ramekins into the oven. Bake until the water is fully absorbed and the tops are dry to the touch, about 20 to 30 minutes (my oven is on the strong side, so it took only slightly more than 20 minutes, but each oven is different; keep checking). Pull the ramekins from the oven and allow to cool on a wire rack before serving. 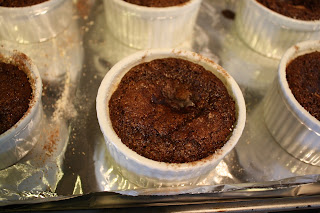 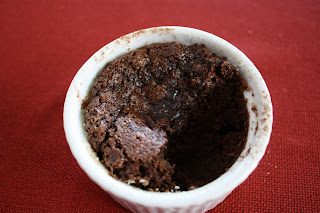