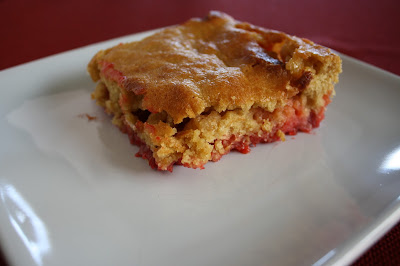 A few weeks ago, I made a rhubarb tart that looked very promising: it had a coconut custard, along with honey, rosewater and cardamom for flavoring. In the end, though, those flavors did not shine through, the rhubarb should have been diced instead of cut in 2-inch pieces, and there wasn’t enough sweetness to tame it. So I won’t be making that one again. Luckily, though, I found a recipe to redeem the rest of the rhubarb I had in the crisper drawer: the big pink rhubarb cake (the name of which reminds me of the Big Gay Ice Cream Shop for some reason). It’s a retro recipe from the 1950s and it calls for a box of jello powder and some mini-marshmallows; somehow, I bet the original recipe called for a box of yellow cake mix, too. I made it anyway, and it was wonderful. The bottom layer becomes very pink and is a great match for the cake layer. This cake is good any time of the day, be it breakfast, dessert or snack. I’ll be making it again!

Evenly distribute the rhubarb on the bottom of the greased baking pan. Sprinkle the ½ cup sugar and contents of strawberry jello mix onto the rhubarb. Layer the marshmallows on top of the rhubarb as evenly as possible. Lastly, pour the cake batter over the entire surface of the rhubarb/marshmallow. It's okay if a few marshmallows poke through, it will be a thin layer of batter.

Bake for about 35 to 45 minutes or until the cake is set. Allow to cool and sift the powdered sugar through a strainer to dust the top of the cake. 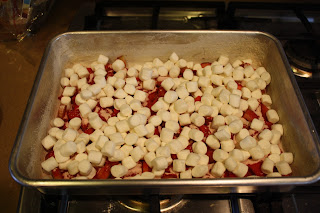 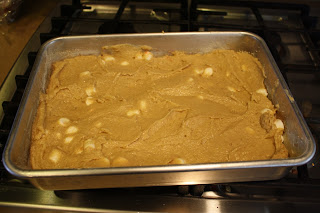 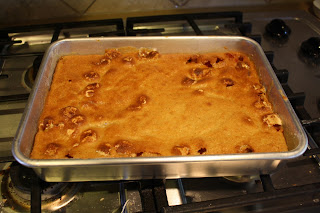 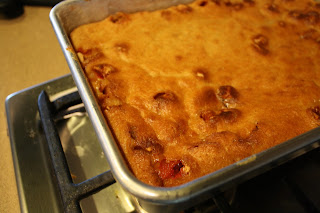