I guess I’ve been on a bit of a pancake kick lately, as I’ve tried three pancakes recipes in as many weeks… And they were all hefty, puffy pancakes, too. I decided to put them all in the same post, to avoid redundancy – plus, I actually did have a clear favorite.


First, I made sour cream pancakes when my mother-in-law visited us at Easter. At first, I wondered whether they were failures, because the batter seemed very thick, so I thought maybe I should add more milk the next time I made them. However, they turned out great! They were proclaimed “moist” and “delicious”. The original recipe called for a topping made with sour cream, maple syrup and butter, but I made one with only sour cream and maple syrup. In the end, though, I’d recommend topping them with plain maple syrup. I ended up with 7 pancakes from this recipe.

Whisk together flour, sugar, baking soda, and salt in a bowl. Whisk together sour cream, milk, egg, and melted butter, then whisk into flour mixture.

Brush a 12-inch nonstick skillet with melted butter and heat over medium heat until hot. Working in batches, pour a scant ¼ cup batter per pancake into skillet and cook until bubbles appear on surface and undersides are golden brown. Flip and cook other side, about 1 minute. Transfer to a baking sheet and keep warm in oven. Lightly butter skillet between batches. 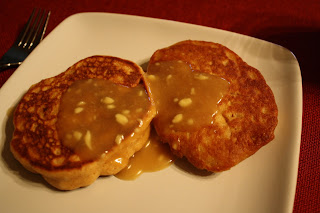 The second recipe I tried is a blueberry yogurt multigrain pancake from Smitten Kitchen, because I finally bought rye flour. These were good and hearty, and while I liked them, I eventually felt like they were a bit heavy (but I ended up with 13 of them, so there were lots of leftovers to deal with). I would make them again, though.

Melt half of butter. Remove from heat and stir in second tablespoon of butter until melted. This keeps your butter from being too hot when you next want to add it to the wet ingredients. (I skipped this step entirely, since obviously my oil was already at the right consistency.)

Preheat your oven to 200 °F and have a baking sheet ready (to keep pancakes warm). Heat your skillet or sauté pan to medium. If you’ve got a cast-iron skillet, this is my favorite for pancakes. Melt a pat of butter in the bottom and ladle a scant ¼ cup batter at a time, leaving at space between each pancake. Press a few berries into the top of each pancake. The batter is on the thick side, so you will want to use your spoon or spatula to gently nudge it flat, or you may find that pressing down on the berries does enough to spread the batter. When the pancakes are dry around the edges and you can see bubbles forming on the top, about 3 to 4 minutes, flip them and cook for another 3 minutes, until golden underneath. (If you listen closely, after a minute you’ll hear you blueberries pop and sizzle deliciously against the pan.) If pancakes begin cooking too quickly, lower the heat. Transfer pancakes to warm oven as they are done cooking, where you can leave them there until you’re ready to serve them. 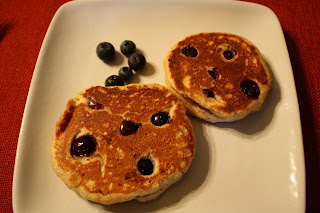 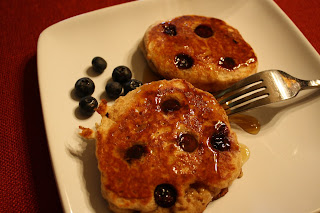 Finally, I made chocolate chip sour cream pancakes. The recipe is clearly adapted from a plain pancake recipe, because after listing the chocolate chips in the ingredients, the blogger didn’t mention them anywhere after that! I decided to mix them in the batter, as I tend to prefer that to chips dropped into a pancake before it is flipped over. I used 1 cup of sour cream instead of ¾ cup, which made my pancakes perhaps a little more fragile than intended, but I’d do that again any day; one just needs a bit more caution when flipping them. These really hit the spot, and I preferred them to both the sour cream pancakes and the blueberry pancakes above – plus, since I used white whole wheat flour, they were still whole grain pancakes, albeit not multigrain ones. I ended up with 11 pancakes (which disappeared more quickly than the blueberry ones), and served them with maple syrup, as usual.

In a large bowl, whisk the milk, sour cream, eggs, butter, and vanilla smooth. Stir the dry ingredients into the batter until they are incorporated and the batter is smooth and all lumps are gone. Stir in the chocolate chips.

Heat a non-stick skillet on medium heat and coat it with non-stick spray (I always use vegetable oil). Pour ¼ cup of the pancake batter onto the pan. Watch for the pancake to form bubbles around the edges of the pancake and then gently flip the pancake over and cook for about 45 seconds more until both sides are just slightly golden.

Repeat this process for the remaining batter, spraying new non-stick spray before each pancake and keeping cooked pancakes on a baking sheet in the oven so they stay warm until you are ready to eat. 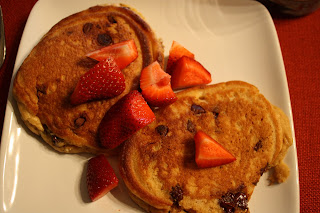 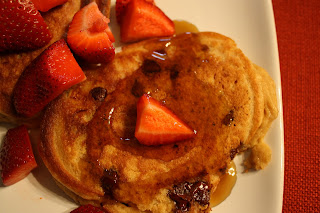