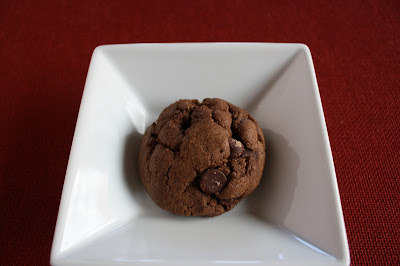 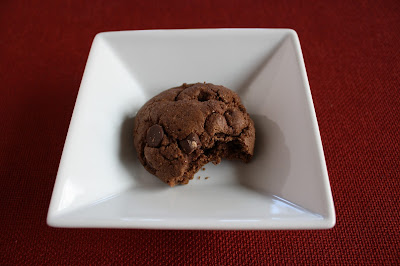 I recently made my friend Jen’s grandmother’s peanut butter marshmallow squares (the recipe is actually here, too). While they were good, and the Engineer compared them to a peanut-buttery cloud, they were too much for me. I have a sweet tooth, but these were beyond what I could handle! I could only have a little square at a time, except that it didn’t quite satisfy any dessert cravings I had. I think this would be a great dish for a potluck, though, where everyone has a little bit of everything, but I won’t make it again for the household.

But then I tried these cookies from Bakerella, which I thought were in the same vein because they’re double-chocolate with peanut butter. Turns out I was wrong: the peanut butter is actually very subtle here, and even the chocolate isn’t overwhelming. The Engineer said it was a harmonious cookie, and I less eloquently declared them to be like crack – I couldn’t help but swipe one every time I passed the baking sheet. And they were so good! I really loved them and will be sure to make them part of the rotation. As for the yield, things get a little blurry here. The original recipe says 30 cookies, but I made 24. I was reminded of David Lebovitz’s tweet from a month ago: “Problem with Cookie Dough: Yield never matches how many cookies it's supposed to make. / Solution: Stop eating the dough before baking it.” Yeah, that might have been a factor (don’t worry, I used pasteurized eggs). But then again, I had dough left over at the bottom of the bowl, only it had a sandy consistency and was too dry to hold together, like the egg had never gotten around to it. I considered adding an egg white and baking those cookies too, but then I ended up using it as a topping on ice cream and yogurt, and that was fabulous.

In a small bowl, mix flour, cocoa, soda and salt using a wire whisk and set aside.

In another bowl, cream butter, sugar and peanut butter until light and fluffy.
Add eggs and vanilla and mix until combined.

Roll cookie dough into 1¼ -inch balls. Place on parchment paper covered baking sheet. Bake 10 minutes (I baked mine 13 minutes; I baked both sheets at the same time and rotated them after 5 minutes).
Place cookies on cookie rack to cool. 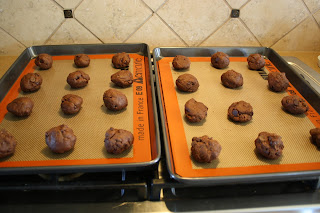 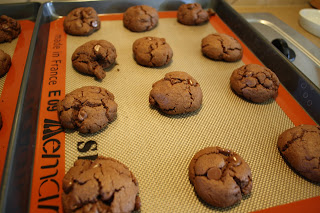 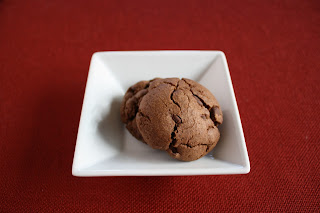