Salads of the moment

I’ve made two different salads recently, and both of them were fabulous. They were immediate hits for the two of us! In both of them, I used mini San Marzano tomatoes, which I’ve fallen in love with, as they are a small tomato but still bigger than cherry tomatoes. They also contain avocados; as always, I advise you to only cut up the amount of avocado you’ll use for one sitting and add it to your plate immediately before eating. I found the avocados particularly good these past few weeks! I found both these recipes via Pinterest.

The first is an avocado, tomato, edamame and red onion salad, for which I’ll give guidelines more than a precise recipe. I used a package of frozen edamame beans, cooked according to the instructions, but you could use less; half a red onion, chopped; a liberal amount of tomatoes, chopped (there aren’t many in the pictures below, they’re hidden under the rest of the ingredients and I didn’t bother styling the dish); and a total of two avocados, for 4 servings (leftover salad was eaten without avocado). I made a dressing with raspberry wine vinegar (though red wine vinegar would be perfect), olive oil, Dijon mustard, salt and pepper. It was divine, light and filling at the same time, healthy and/but delicious. I’ll definitely be making it again! 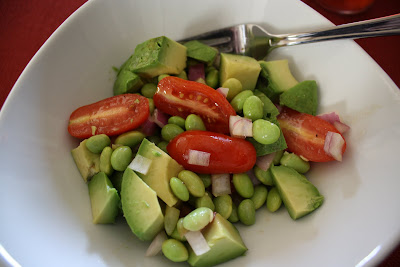 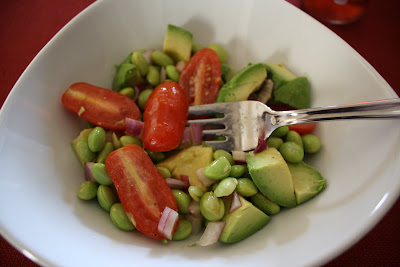 The second, adapted from the Diva Dish, had lemon, quinoa, cilantro, chickpeas and cumin along with the tomatoes and avocados. We thought it was the best thing ever and absolutely loved it. The Engineer says it’s possibly the best use of quinoa he’s tasted. It took a little longer to make, but was totally worth it. I think that you could cook the quinoa the regular way, though (i.e., bring to a boil, then simmer, covered, for 15 minutes), since it’s faster. 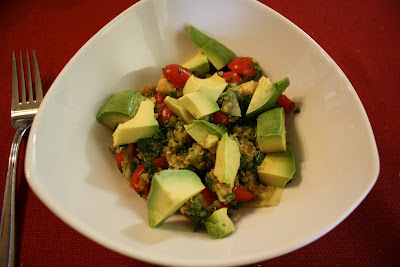 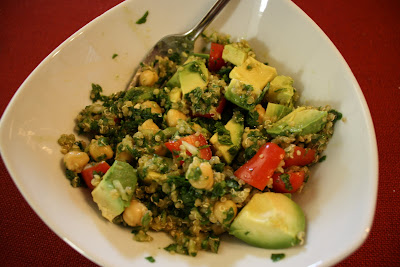 Start by making the quinoa: soak the quinoa in a pot in the vegetable broth for about 15 minutes. Turn the heat on to medium-high and let the quinoa come to a boil. Once it boils, reduce the heat to medium-low and let the quinoa simmer. Stir every so often and cook quinoa about 20-25 minutes, just until the liquid is absorbed – don’t let it dry out completely, though; when there is just a tiny amount of liquid left in the pot, remove it from the heat and cover. Set aside to cool. (As noted above, I’d consider bringing the quinoa and broth to a boil, then reducing the heat to low and letting it simmer, covered, for 15 minutes.)

As long as the food processor is out and dirtied, use it to chop the onion and garlic, then add to the greens mixture.

Add the chickpeas to the serving bowl and mix well. When your quinoa has cooled, add it to the bowl as well, along with the tomatoes.

Make the dressing by whisking all the ingredients together. Pour over salad and mix until combined. You can set the salad aside for 10-15 minutes to allow the flavors to meld.

Serve and top with avocado.