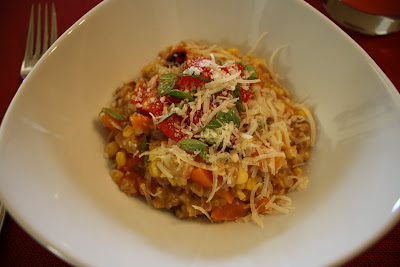 Remember the concept of SPE, that I mentioned a month ago? One of the restaurants famous for it is Rouge Tomate, in New York. So when they shared their recipe for corn farrotto in Bon Appétit, I decided to make it. I got five ears of corn for $1, and used all of them in this dish, along with more mini San Marzano tomatoes. Here’s a tip I learned in Cook’s Illustrated: to prevent corn kernels from flying all over the place when you’re cutting them off the cob, prop up the ear of corn upright in the center funnel of an angel food cake pan. The pan will catch all the kernels as they fall from the cob! I didn’t get the consistency of the farrotto quite as creamy as I had hoped, but it was still very good! I’ve realized that I really like farro, and the fact that it’s healthy is a nice bonus.

For the corn purée
Combine corn, onion, oil, and a pinch of salt in a medium saucepan. Cook over low heat, stirring occasionally, until onion is softened and translucent, 6–7 minutes (do not brown). Add 2 cups broth, increase heat to high, and bring to a boil. Reduce heat to medium-low and simmer gently, uncovered, until corn is softened and cooked through and liquid is reduced by half, 20–25 minutes. Let cool slightly. Transfer mixture to a blender and purée until smooth (when puréeing hot liquids, start with the lid slightly ajar to release steam; cover with a kitchen towel to catch any splatters).

Strain purée through a sieve into a 2-cup heatproof measuring cup. Add more broth, if needed, to measure 1 1/3 cups. Set aside.

For the farrotto
Bring 2 cups broth, farro, a pinch of salt, and 1 cup water to a simmer a large saucepan. Cook until farro is tender, 30–45 minutes (semi-pearled farro will cook faster than regular). Drain; return to pot.

Meanwhile, heat oil in a large skillet over medium heat. Add onion and cook until just beginning to soften, about 3 minutes. Add bell pepper and corn and cook, stirring occasionally, until vegetables begin to brown, about 5 minutes longer; keep warm.

Add corn purée to farro and cook over medium heat, stirring occasionally and adding more broth by ¼-cupfuls if dry, until farrotto is very creamy, 5–6 minutes. Stir in cheese. Season with salt and pepper.

Stir tomatoes and basil into vegetables. (I chose to stir the bell pepper mixture in the farrotto and top the dish with tomatoes, basil and extra parmesan.)