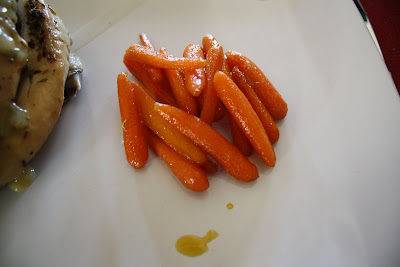 I got this recipe in last February’s issue of Bon Appétit, which had a feature on Southern cooking. Sorghum syrup, apparently, is a Southern thing. Well, I’m pretty sure it’s got to be an African thing, too, but here it’s a Southern thing. This was my first time using it. It looked and tasted like molasses, but once it cooked down with the carrots, it was a different animal entirely. The recipe says to substitute honey if you can’t find it. I’m sure it would be good, but the sorghum syrup here is what made this recipe stand apart from the other similar ones I have (I guess I haven’t gotten around to posting them, but they include carrots glazed with maple syrup, or with ginger and honey). I omitted the bourbon entirely, because I didn’t feel like buying another bottle of alcohol to use up only a few tablespoons. Ideally, you’ll want to use small carrots of some heirloom variety (like yellow or purple carrots), both because it looks better and because they cook faster than the so-called baby carrots (which are basically regular carrots trimmed down). The result was really good! I served it with honey-roasted chicken with herbes de Provence gravy. Note that I halved the recipe and had enough for 4 servings as sides; the recipe below makes about 8 servings.

Melt butter in a large skillet over medium heat. Add carrots and sauté until beginning to soften, about 10 minutes (longer for baby carrots, in my experience). Add ginger and sorghum. Cook for 2 minutes. Remove from heat; stir in orange juice and bourbon. Return to heat; reduce heat to medium-low. Cover skillet and cook, stirring occasionally, until carrots are fork-tender, 5–7 minutes. Uncover and cook until liquid has been reduced to a syrupy consistency and carrots are nicely glazed, about 6 minutes. Discard ginger. Season to taste with salt and pepper.