Jambalayas always intimidate me a little, because I don’t like seafood and because I don’t like spicy foods. But of course, if I make my own jambalaya, I can avoid those two problems! I had two recipes I wanted to try, and I made the vegetarian one first. It’s originally a vegan recipe I found on The Kind Life, but I used some vegetarian bacon and vegetarian chick’n that aren’t vegan. I also changed the spices a bit to make sure it was mild, though I served it with sriracha sauce on the side for the Engineer, who preferred his that way. The dish wasn’t hard to prepare, and we had a lot of leftovers (which I think would freeze well). 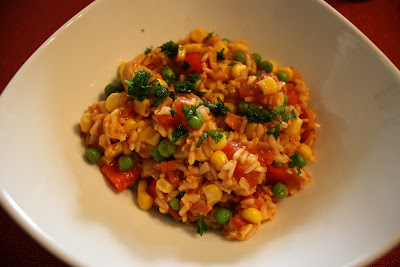 Cut the “bacon” into chunks and add to pan along with the paprika and cook until it starts to color.

Cut the pepper into large pieces, add to pan, season and allow to soften with the other ingredients.

Pour in the brown rice, give it a stir and then add the tomato purée and chopped tomatoes. Season, add the molasses and one cup of water. Shake in a good amount of tabasco sauce (I didn’t use it here). Fill the cup with water and set aside – you will use this water throughout.

Allow to gently simmer for 30 min before adding the frozen chicken-style pieces – if using refrigerated pieces instead of frozen, they will take less time to cook. If it becomes too dry, add more water, like you would do for a risotto. Cook for a further 15 minutes or until the rice is fully cooked.

A few minutes before serving, add the peas and sweet corn and allow them to gently cook before sprinkling in the parsley ensuring to reserve some for when you plate up. Season and/or add more tabasco if necessary.

Serve in bowls and sprinkle with parsley.