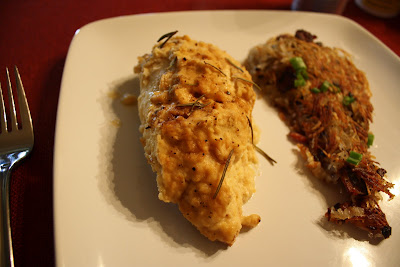 I made this chicken recipe from O Magazine, the same issue in which I found the carroty mac and cheese. I made hummus with my mother’s recipe (below), though you could buy hummus if making it isn’t your thing (although hummus is so simple that you might as well make it!). The gist of the recipe is that you cover the chicken with hummus, sprinkle the whole thing with lemon juice, rosemary and balsamic vinegar, then bake it until it’s done. And it’s fantastic! The Engineer regarded it with a bit of suspicion, then bit into it and simply said, “Wow!” The hummus keeps the chicken moist, on top of adding wonderful flavor. I’ll definitely be making more.

This time, I served it with rösti, though a green vegetable would be more appropriate. The Engineer didn’t know what rösti was, so I summarized it by saying that it’s a pan-sized latke. But when he saw that there was bacon in it, he said, “This is so treife!” We both like rösti, though, with or without bacon.

In a small bowl, mix the tahini, cumin, salt and garlic; slowly add the lemon juice and boiling water.

Put the chickpeas in the food processor and process; add the tahini mixture and process again. Add water if needed (especially if using ground almonds). Taste and add cumin or other seasonings as needed. Garnish with parsley if using.

Preheat the oven to 450 °F. Line a baking dish with tin foil and put the chicken breasts in it. Smother the chicken breasts with the hummus, then top with a squeeze of lemon juice, a sprinkle of balsamic vinegar, chopped fresh rosemary, and lemon slices (optional). Bake until hummus is golden brown and meat is cooked through, 30 to 35 minutes. Season with salt and black pepper to taste and serve immediately. 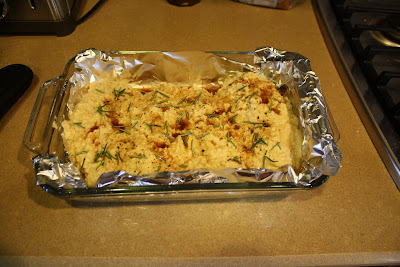 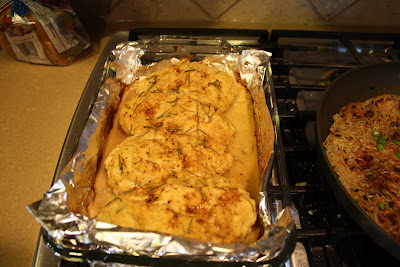 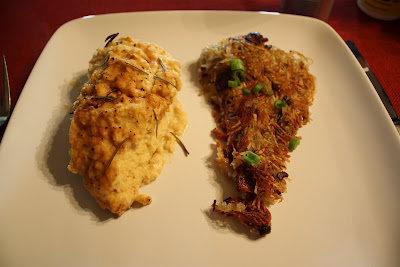 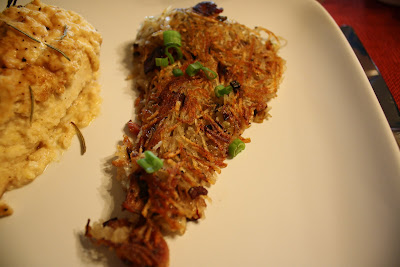