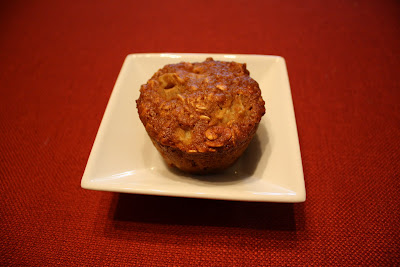 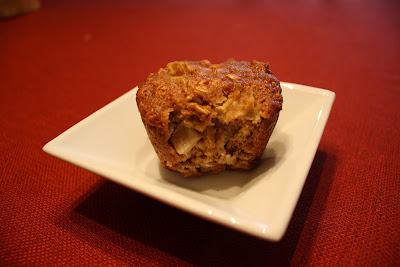 I found this muffin recipe on Tea and Cookies, where it was adapted from Sophie Dahl’s pear muffins. I decided to make them the easy way, without any decorative pear slices on top (though I admit they would look better with the pear slices). I didn’t use any nuts or raisins, because I feel like they don’t have a place here, but I did keep the crystalized ginger. For a sweetener, I used a few tablespoons of agave syrup and topped it up with coconut nectar; note that the agave syrup is much more fluid than coconut nectar or honey, but the former and latter are both suggested in this recipe, so you do have some leeway. I also used applesauce instead of pear purée, since that’s what I had on hand. I liked all the whole grains in this and the fact that the resulting muffins are dense, but not too heavy – and they certainly don’t “taste like fiber”. The recipe makes 12 muffins, and since they freeze well, I froze half of them for future breakfasts.

In a medium sized mixing bowl, add all the dry ingredients (baking powder, baking soda, ginger, cinnamon, nutmeg, salt, spelt flour and oats). Stir to blend and make a well in the middle.

Lightly beat the egg whites until they are foamy and hold a bit of their shape.

In a small bowl, mix the yogurt, pear purée, and honey/agave; add to the bowl with the flour mixture and stir to combine. Add the egg whites and gently fold into the batter. Add the diced pear and crystalized ginger, if using. Mix briefly to incorporate.

Spoon the batter into muffin tins lined with cupcake liners, or use parchment paper cut into squares. If you prefer to bake strait into the muffin tins, grease them with a bit of oil before. Fill each muffin tin ¾ of the way up. Bake for 25-30 minutes. The tops of the muffins will brown slightly, but the insides will remain moist. 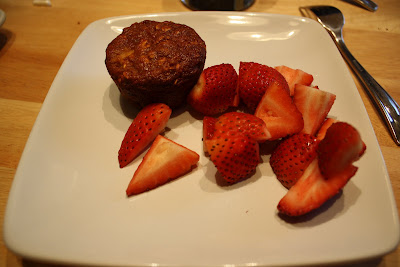