I’m finally getting around to reviewing the first BabyCakes cookbook, which came out three years ago (for those who don’t know, BabyCakes is a vegan bakery in New York that’s gotten rave reviews; they’ve since opened bakeries in Los Angeles and Orlando as well). I was a little angry when the first printing came out, because the tagline on the cover page of the first edition said “Vegan, Gluten-Free and (Mostly) Sugar-Free from New York's Most Talked-About Bakery”. The problem? While all recipes in the book are wheat-free, a lot of them contain spelt – which is NOT gluten-free. The editor who wrote the tagline basically hadn’t taken the time to find out what he was talking about. (The author of the book does discuss ingredients and substitutions here, and she’s well aware that spelt contains gluten.) In the second printing, it has been corrected to “Vegan, (Mostly) Gluten-Free, and (Mostly) Sugar-Free Recipes from New York's Most Talked-About Bakery”. I still have an issue with the word “sugar”, because it is used here as a synonym for “refined white sugar”, but there are tons of different sweeteners that still qualify as sugar without being the white refined stuff. A second cookbook has been published since then.

I was drawn to the idea of a vegan baking book because of my lactose-intolerance for the most part, and I also loved the idea of reducing sugar in my desserts. Because both the book and the shop were getting such rave reviews, including from non-vegans and from people who do eat wheat and, alright, because of the awesome trailer too (it’s too good not to share), I put the book on my wish list and got it for the holidays. I’ve made four recipes from it and I think I can talk about it in more general terms, now.

I started with the vanilla cupcakes, which happen to be gluten-free to boot. The recipe for both cupcake and frosting is on Epicurious. I made a half recipe, because I never want more than a dozen cupcakes in the house! My expectations were high, because this cupcake was once crowned the best cupcake of New York City (the best of ALL cupcakes, including non-vegan ones and wheat-based ones). However, my experience was quite different. I didn’t make cupcakes, I made little bricks! And the frosting never firmed up (which, according to BabyCakes' troubleshooting page online, tends to happen). They were so bad that I threw some away. ME, of all people, I threw away cupcakes – that speaks volumes. I’m not sure what happened. Perhaps I made a mistake when halving the recipe; perhaps the fact that the ingredients are written out in volumes instead of weight was a factor, as this is even more crucial when baking gluten-free; perhaps some of my ingredients weren’t fresh enough (this does happen with some gluten-free flours in my pantry). As for the frosting, I do know that it’s not the recipe used in the actual bakery; the one in the book was written to be more accessible to the home cook. So I’d love to try this recipe one more time if I ever get measurements in weight, but until then, I’m not touching it again. 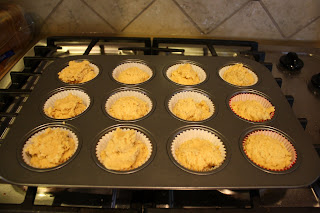 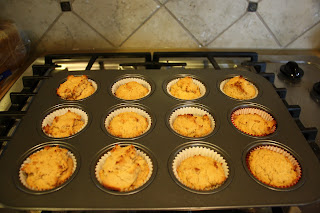 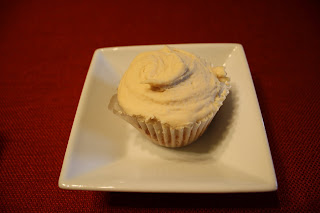 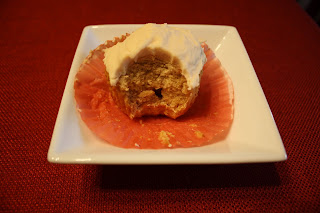 After that, I made the red velvet cupcakes. I halved this recipe as well, but it turned out better. Then again, it calls for spelt flour, which gave them a consistency more like what I’m used to. They were a little dry, so I’d bake them a little less if I made them again. They were good, but not sweet at all, so they definitely need the frosting. I didn’t use the BabyCakes frosting this time, but one of my own (for a vegan frosting to pair with red velvet cake, you can try this fluffy buttercream one or that cream cheese one). The recipe for the cupcakes can be found here. As I said, they’re pretty good, but they’re certainly not dethroning my go-to utterly ridiculous red velvet cake. 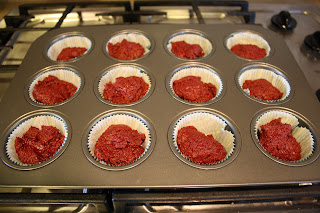 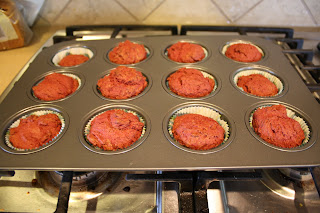 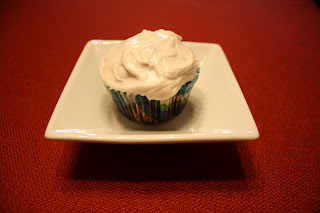 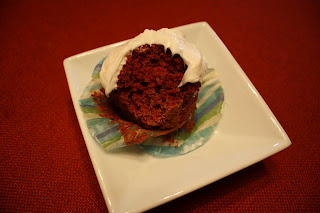 The third recipe I tried was the banana bread, because it did look really good. I adapted the recipe a bit because I did not like that it called for a smaller-than-standard loaf pan AND had quantities planned in such a way that you DEFINITELY had batter left over. I put the whole thing in a regular loaf pan and baked it 10 minutes longer, and it turned out great. It could have gone wrong, because it can be hard to bake gluten-free goods in big pans, but seriously, it was nicely baked all the way through. At first, I wasn’t too sure about using Bob’s Red Mill all-purpose gluten-free flour, as the recipe calls for, because it contains chickpea flour and fava bean flour, neither one of which is the best choice for desserts, in my opinion. However, this isn’t really a dessert, more like a snack or breakfast item, and it worked well. That being said, Bob’s Red Mill all-purpose gluten-free flour is cross-contaminated by nuts; if you want to make this banana bread nut-free, try making your own all-purpose flour using a recipe such as this one or that one.

When I first tasted this banana bread, I thought it wasn’t sweet enough and decided I would definitely add chocolate chips next time. But when I had it again in the morning, it was perfect as it was! I like to cut myself a thick slice, toast it and spread a little margarine on it. This bread, despite being gluten-free, held together just fine in the toaster. It’s moist, delicious, and if I hadn’t made it myself, I’d have never known it was vegan or gluten-free. It’s also healthier than most banana bread recipes, so I really recommend it! It disappeared in two days. I’ve written down the recipe below, with my modifications (a version of the recipe is available on the BabyCakes website here, though it’s not quite the one printed in my cookbook; interestingly, there’s less batter total, but a higher ratio of sweetener and six times the vanilla). 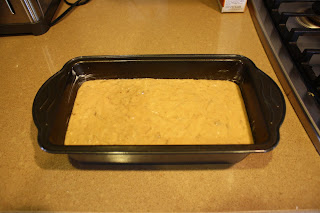 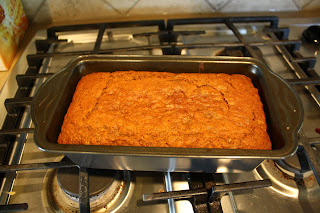 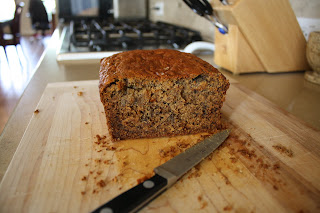 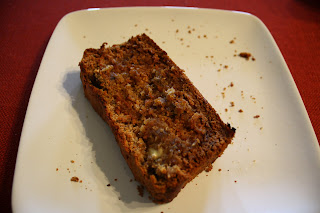 Finally, I decided to make a half batch of the chocolate chips cookies, which is still about 2 dozen. The recipe said to use a melon baller to portion out the dough; that seemed very small to me, so I used my cookies scoop, which is bigger than a melon baller but smaller than an ice cream scoop. I realize now that I got 25 cookies by halving a recipe that the book claims makes 36 cookies in all, so clearly the author’s melon baller is even bigger than my cookie scoop! This recipe also calls for Bob’s Red Mill all-purpose gluten-free flour, and as it turns out, BabyCakes’ chocolate chip cookie recipe is the one printed on the package of flour! These cookies spread more than I thought they would and were perhaps over-baked by a minute or two, but they were still very good. And again, I certainly don't miss the gluten. They also gave me the opportunity to try a new-to-me product, Ricemellow Creme, which is essentially the vegan equivalent of marshmallow crème. It contains only four ingredients, but mostly brown rice syrup, so it’s much less processed than marshmallow crème and doesn’t contain refined sugar – though it is super sweet. It’s not pure white, more of a pale café-au-lait, because of its contents. I used it to make a version of this suggested by BabyCakes: cookie sandwiches, which I popped in the freezer for a while before eating. It felt very decadent! I wrote the recipe below; it is also available on Oprah.com. 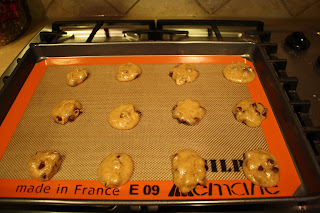 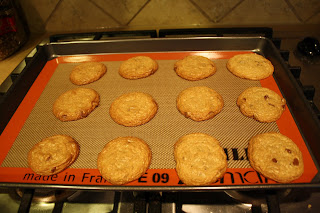 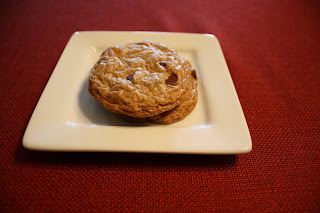 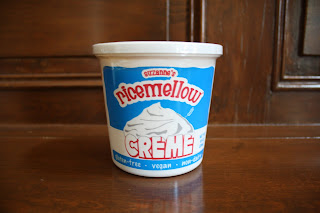 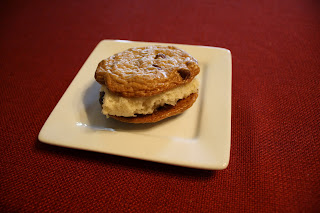 So overall, there are things that I don’t like about this book, like imprecisions in quantities or amounts that are wrong for the size of pan specified (that being said, those things have been amended on the website, so I wonder if a third printing of the book would have the corrections as well). I feel like I shouldn’t have to tinker with a printed recipe to get it to work; I can tinker with it to suit personal preferences, but that’s another matter. Still, I think that this cookbook has a lot of potential. I might try a scone recipe next.

Preheat oven to 325 °F. Brush your loaf pan with oil (or use vegan margarine) and set aside.

Pour batter into loaf pan and set in the oven. After 20 minutes, rotate the pan 180 degrees. Continue baking for about 25 minutes longer, or until a toothpick inserted in the center comes out clean.

Let banana bread stand in the pan for 20 minutes. Gently run a knife around the edge of the cake, cover the top of the pan with a cutting board and invert the loaf onto the board. Carefully lift the pan away and re-invert the bread. Covered with plastic wrap, it will keep at room temperature for 3 days.

In a medium bowl, mix together the oil, applesauce, salt, vanilla and evaporated cane juice. In another medium bowl, whisk together the flour, flax meal, baking soda and xanthan gum. Using a rubber spatula, carefully add the dry ingredients to the wet mixture and stir until a grainy dough is formed. Gently fold in the chocolate chips just until they are evenly distributed throughout the dough.

Using a melon baller (or small cookie scoop; see above), scoop the dough onto the prepared baking sheets, spacing the portions 1 inch apart. Gently press each with the heel of your hand to help them spread (this was definitely not necessary in my kitchen). Bake the cookies on the center rack for 15 minutes (I would say a bit less), rotating the sheets 180 degrees after 9 minutes. The finished cookies will be crisp on the edges and soft in the center.

Let the cookies stand on the sheets for 10 minutes, then transfer them to a wire rack and cool completely before covering. Store the cookies in an airtight container at room temperature for up to 3 days.

Optional: Slather on an extremely generous dollop of your favorite frosting (or a marshmallow crème equivalent; see above) between two cookies; eat as is or freeze them first.
Posted by Amélie at 11:43 AM

Definitely not a book for me! I am not a tinkerer, so if a recipe doesn't work as written it goes in the trash.

I know what you mean! I can tell you that both recipes I wrote out here worked for me (I included the changes to the banana bread recipe). I've never tried it, but I assume you could swap out the gluten-free flour for all-purpose wheat flour if you wanted (you don't need gluten-free if it isn't Passover, as far as I know). Normally, people want to adapt a gluten recipe to gluten-free, not the other way around; I don't know if anyone's done the reverse!