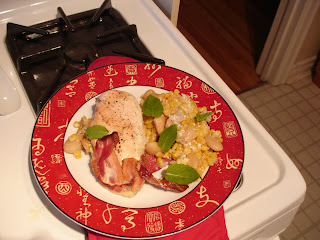 You might get a little freaked out when you see the ingredients, but bear with me, here. I saw this recipe in Jamie Oliver’s Jamie’s Dinners, and it intrigued me. Jamie Oliver has never led me astray, so I decided to take a leap of faith and try it. It turned out pretty good, actually! I did make the mistake of mashing the banana before I put it in the chicken, so try to do it right. Also, I reduced some ingredients and only used two chicken breasts, but we still had leftovers.

Preheat oven to 425 °F and get an appropriately sized roasting tray in which you can snugly fit the chicken breasts side by side. Squash half of the beans into the tray with a fork until you have a pulp; add the rest of the beans to the tray. 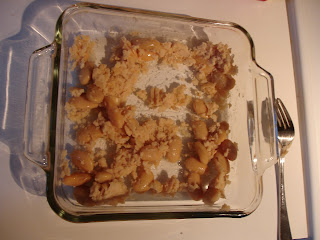 Run a knife down the length of the raw corn cobs to remove the kernels. Add them to the tray.

Put the chicken breast on a cutting board. You will notice that each breast has a little flap of meat on one side. If you fold that back using a knife and make a cut, you can carefully form a little pocket inside the chicken breast. Once you have done this to all 4 chicken breasts, squash half a banana into each pocket. Then fold the flap back over to cover the banana and season with salt and pepper. 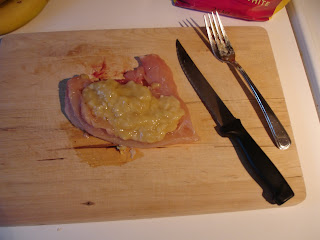 Turn the chicken breasts the other way up and carefully place them on top of the corn and the beans. Add the wine and cream, then divide butter into little knobs and scatter these all around the tray. Drape the bacon slices over the chicken breasts and bake in the oven for 35-40 minutes, until the bacon is crisp. The smoky flavour from the bacon and the smooth flavour of the bananas will have really cooked into the corn and chicken. Serve with mint leaves. 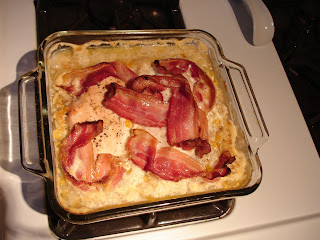 On a side note, I had said before that I would post pictures of the red velvet cake I made for the Engineer’s birthday. I’ve added them under the cake recipe itself. Enjoy!
Posted by Amélie at 12:38 PM