The Engineer and I just got back from a week-long trip to British Columbia. He was presenting at a conference in Vancouver, and we also spent a few days in Tofino on Vancouver Island. We had some good meals in Vancouver, including dim sum, a Terimayo at Japadog, a few sushi dinners as well as The Old Spaghetti Factory in Gastown (a family favourite). I couldn’t resist Cupcakes, where the Red Velvet was, predictably, my choice (both on Thurlow and on Broadway, though one cupcake was a mini and the other was shared). 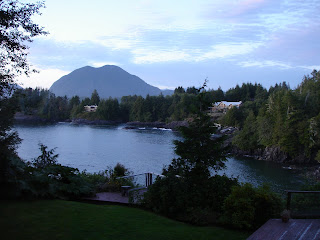 It was Tofino that really charmed us, though. It is a beautiful village, with entertainment (shopping, art AND an Easy Star All-Stars gig!), and as if all the scenery and nature weren’t enough, it also has great food. Schooner is pretty good (I had steak), and I definitely recommend Sobo, where I had the best salad ever along with awesome Key lime pie. 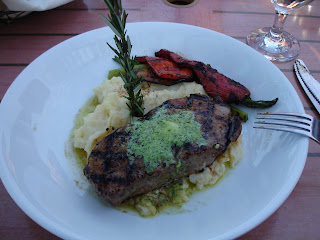 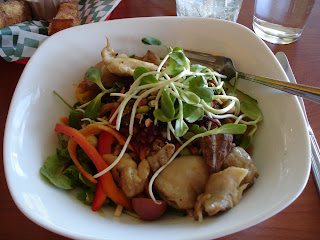 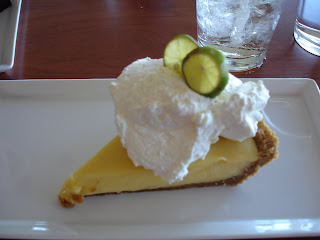 The place I’ll review here is actually Shelter. It’s a relatively new restaurant, but it’s already one of the most popular in town – and with good reason. It is somewhat fancy, but with a nice, hip lounge atmosphere. There is a casual menu for those who want good food without the high price tag. All ingredients are local and fresh. The staff was very friendly and competent, and handled a potentially embarrassing situation in an entirely professional and satisfactory manner.

We started with the tuna appetizer, which was seared local albacore tuna encrusted with black and white sesame seeds, with a sesame-ginger vinaigrette, segmented orange quarters and a bit of cilantro. This was absolutely delicious! I think I’d never had tuna this good, even in sushi restaurants. 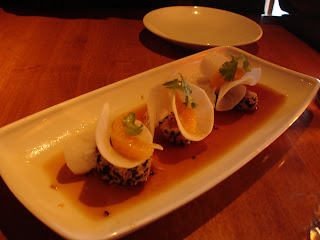 The Engineer’s pizza was awesome, with a thin crust, provolone, mozzarella, bacon, chorizo, fresh basil and – the most interesting and tasty part – balsamic syrup. I had the warm chèvre salad. While it was good at first (I just love goat cheese), with its caramelized onions and smoky bacon complementing the flavour, and greens that didn’t wilt with the heat (kale along with red and green Swiss chard), it got to be too heavy towards the end. I think that the greens in this salad are best in small servings, and this was maybe a bit too much. I could eat raw arugula all day, for example, but it certainly wouldn’t resist the heat. 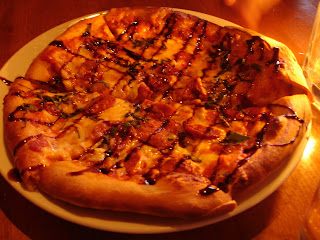 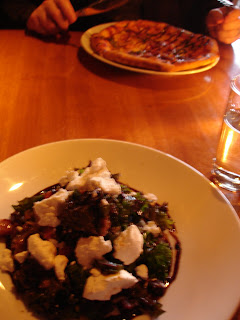 For dessert, the waitress recommended the apple pie, and we are so glad we went with it. It was layers upon layers of paper-thin apple slices, with a delicious crust, served with vanilla bean ice cream and a few Granny Smith apple wedges. A fantastic dessert! We definitely recommend the place to anyone visiting Tofino – and if it weren’t so darn far from Montreal, we’d go again ourselves! 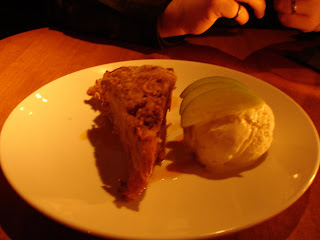