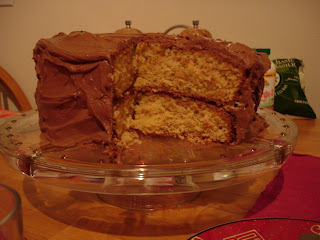 Here’s a recipe that I originally got from Chowhound and changed a bit. I made it the night after the crème caramel, since that dessert had not lived up to my expectations and the Engineer hadn’t been too fond of it either. I forgot to take pictures during the process, but it’s really nothing complicated.

Heat the oven to 350°F with the rack in the middle position. Grease two 8-inch cake pans and put a piece of wax paper in the bottom. Grease again, then flour. Set aside.

Combine flour, baking powder, salt and baking soda in a small bowl and whisk together. Set aside.

Place butter in the bowl of a stand mixer (a hand-held one will do just fine, too) fitted with a paddle attachment and mix on medium-high speed until fluffy and light in color, about 3 minutes. Add sugar and vanilla, and continue beating another 5 minutes. Don’t forget to stop the mixer and scrape down the sides of the bowl and the paddle as necessary. Add yolks one at a time, letting each incorporate fully before adding the next. (Once again, I kept the whites and set them aside, along with the ones from the crème caramel, for an upcoming recipe.) Add the whole eggs in the same manner, allowing 1 minute between additions.

Divide batter evenly between the prepared pans. Bake until edges slightly pull away from the pans and a cake tester inserted in the center comes out clean, about 30 to 40 minutes.

Remove the pans from the oven and let cool on a wire rack about 10 to 15 minutes. Run a knife along the perimeter of each cake, then turn out onto the rack to cool completely (at least 1 ½ hours) before frosting.

This was originally a classic buttercream frosting. However, I used a margarine that’s 100% soy, so the icing is actually lactose-free*, but it still tastes great. And the chocolate keeps the icing from being too sweet.

Beat margarine in the bowl of a stand mixer fitted with a paddle attachment, on medium-high speed until light and fluffy, about 3 minutes.

Turn the mixer off and add the vanilla and the chocolate. Beat on medium-high speed until the frosting is airy and thoroughly mixed, about 3 minutes.

Place a cake layer on a cake plate, bottom-side down. Evenly spread about 1/3 of the frosting on top of the layer. Stack the second layer on top and evenly spread another 1/3 of the frosting on the top and sides of the whole cake. (Don’t worry about looks at this point – this is just a crumb layer.) Place in the refrigerator until frosting is set and slightly hard, about 15 minutes. Remove from the refrigerator and spread remaining frosting over the top and sides of the cake, ensuring it’s as even as possible. Ta-da!

I must admit I found this cake a bit dry, so maybe it should be made with oil or apple sauce or something along those lines. I’ll let you know if I ever figure out the proportions, but any suggestions are welcome.


*At least, that’s what I thought, since the package said in several places “100 % soy”. But then the next day, I got a little sick. So I bothered looking closely at the package: it actually has a list of ingredients, not all of which are soy. This contains whey! So it is NOT 100% soy, it DOES have dairy, and this false advertising has infuriated me enough to make the following statement: Bergeron margarine makers should be ashamed of themselves. 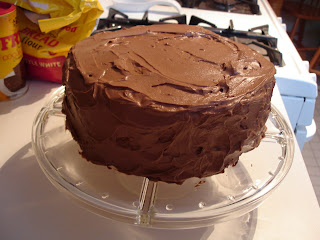