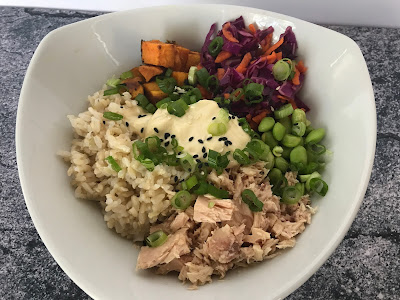 This recipe is from Food Network, where it was originally called a healthy tuna grain bowl with turmeric sweet potatoes and spicy yogurt dressing. I didn’t make my dressing spicy; I meant to use a rice substitute, but forgot to buy it at the store, so regular brown rice it was. This dish was delicious, but most of all, it was super satisfying as a lunch and kept me full until dinner – not a negligible thing! The amounts below make 4 generous servings – I recommend storing the leftovers separately in the fridge and assembling the salad as you’re ready to eat, warming up components as needed.
2 medium sweet potatoes, peeled and diced into 1” pieces (mine were smaller)
2 Tbsp. toasted sesame oil, divided
¾ tsp. ground ginger, divided
¾ tsp. ground turmeric, divided
kosher salt and freshly ground black pepper, to taste
3 cups cooked brown rice
¼ head red cabbage, thinly sliced (about 2 cups) (I chopped it further)
2 small carrots, trimmed and peeled into paper-thin ribbons (I grated them)
2 large limes, halved (1 half cut into wedges for serving)
¾ cup lactose-free Greek yogurt
1 Tbsp. fish sauce (I used ½ Tbsp.)
1 pinch Korean pepper (or chili paste, and increase to taste)
1 ½ tsp. honey
2 5-oz. cans of albacore tuna packed in water, drained
1 cup frozen shelled edamame, thawed
2 scallions, thinly sliced
toasted sesame seeds, for serving
Preheat the oven to 450 °F. Line a rimmed baking sheet with aluminum foil.
Toss the sweet potatoes, 1 Tbsp. of the sesame oil, ½ tsp. of the ginger, ½ tsp. of the turmeric, ¼ tsp. salt, and several grinds of pepper on the prepared baking sheet until evenly coated (I like to do this in a bowl and then spread it out onto the baking sheet). Roast until tender and lightly browned, tossing halfway through, about 30 minutes.
Meanwhile, let the rice cool if you’ve just prepared it, or warm it up if you are using leftover rice.
Toss the sliced cabbage, carrot ribbons, the juice from ½ a lime, 1 pinch of salt, and a couple grinds od black pepper in a medium bowl until well dressed and combined.
Squeeze the juice from the remaining 2 lime halves into a small bowl. Stir in the yogurt, fish sauce, Korean pepper, honey, as well as the remaining 1 Tbsp. sesame oil, ¼ tsp. ginger and ¼ tsp. turmeric, 1 pinch of salt, and several grinds of black pepper until smooth. Taste and adjust the seasoning as needed.
Divide the warm rice among 4 shallow bowls (about ¾ cup per bowl). Top with the roasted sweet potatoes, cabbage-carrot slaw, tuna (about ¼ cup per bowl), edamame, and sliced scallions. Drizzle with the yogurt dressing, sprinkle with toasted sesame seeds, and serve with the reserved lime wedges for squeezing. 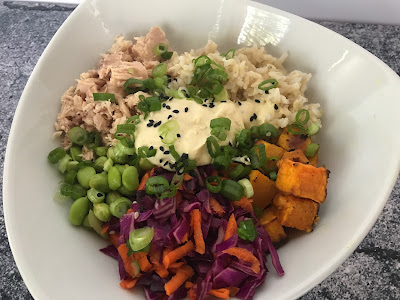