I had decided to knit for myself a bit more, so I made a quick project: Mira’s Cowl (a free pattern). It calls for a fingering-weight yarn, so I went with Malabrigo Sock Yarn in Ravelry Red (it appears darker on that page than in real life – the color here is more accurate). What I didn’t like is that once you’ve knit your cowl, you have to block it very aggressively, so I’m not sure why I have to use fingering-weight to cast on so few stitches in the first place… I understand that it should create a lighter fabric, but I would have preferred a yarn that naturally knits up closer to the finished gauge, even if that meant casting on more stitches. As it is, I couldn’t stretch it out enough for a proper infinity scarf, but now it’s too big for a good cowl! I’ll consider re-blocking it smaller or washing in hot water, we’ll see, or perhaps using it more as a half-length shawl (though that may be my fantasy self, the sophisticated woman who wears shawls around the house). That being said, it was really easy to knit, because once you’ve memorized the pattern, it’s a bit mindless. This makes it a good pattern if you knit during your morning commute, for example. 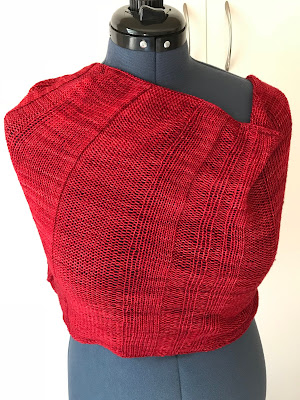 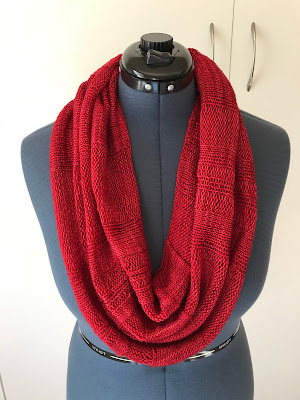 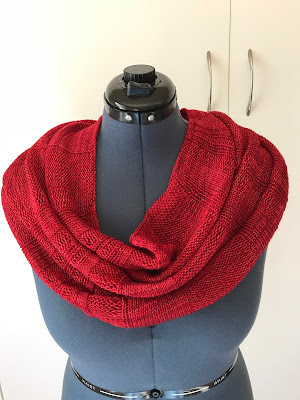 I had started a sweater for myself as well, but had to set it aside for unforeseen reasons – more about that eventually.

I also knit a sweater for the Fox. Unfortunately, I can’t find the pattern online – I think it’s by Phildar, it’s called “Le Pull” and was the 10th pattern in that catalog and was on page 31. But all I have is a photocopy, no catalog reference, sorry. In any event, I really like making this sweater, and I have to say that it is more convenient to knit a colorblock pattern than stripes (no balls of yarn getting tangled). Then again, there was a lot of sewing involved, but I decided to pick up stitches for the collar instead of knitting it separately and sewing it on. I also knit some ribbing at the edges to prevent them from rolling in, and I omitted the slits at the bottom. I used yarn that was given to me by my first cousin once-removed: two skeins each of Phildar Intemporel in Raisin, Émail, and Mercure as well as Phildar Cabotine in Outremer. The sweater is still a bit big for the Fox, so hopefully he’ll wear it next winter. 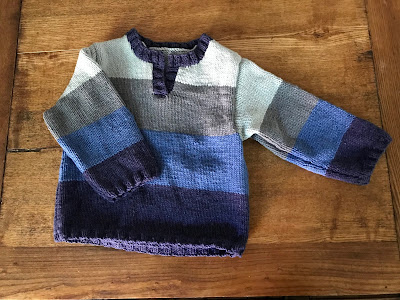 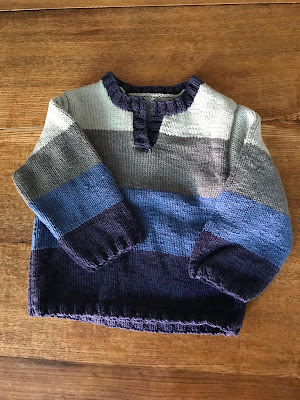 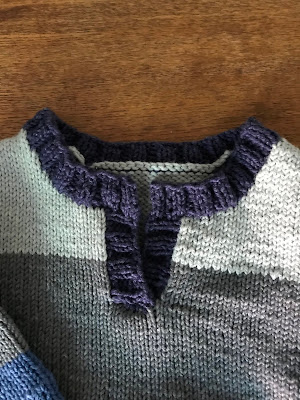 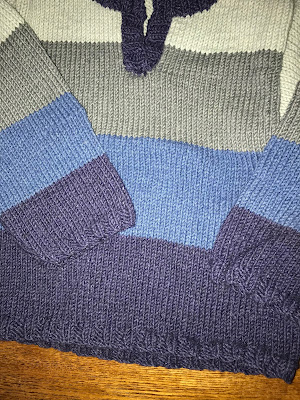 Since I had leftover yarn, I made what I hope can be a gender-neutral cardigan for the baby (due any day now) of the Actor and his Leading Lady; the pattern was the Little Coffee Bean Cardigan and the buttons were from my stash. I can’t express how much I like knitting top-down sweaters with set-in sleeves! 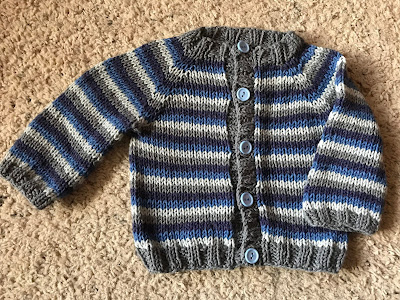 That being said, it didn’t turn out quite as cute as I would have liked, so then I knit up the newborn size of the Tristan cardigan (that pattern is free, and for a fee it comes in sizes up to 12 months here). I used Sublime Baby Cashmere Merino Silk DK in Vanilla, but almost picked Little Linen (I was genuinely paralyzed in front of my screen, trying to pick between white and off-white, and the Engineer picked for me). The buttons are from my stash as well. 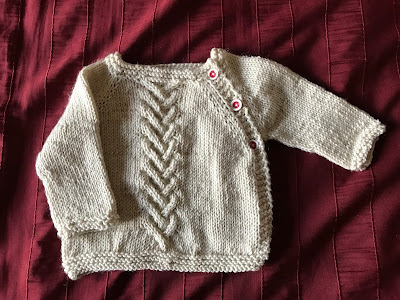 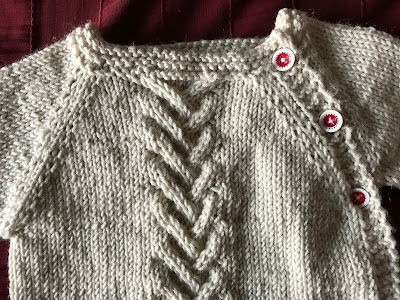 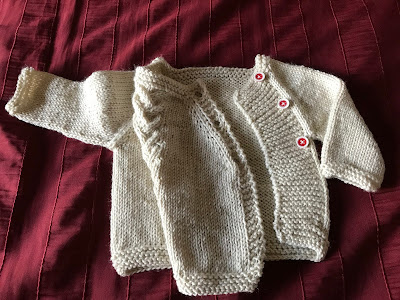 While I was at it, I sewed up another bunny because I had just enough fabric left in my stash to make one, and because the Actor loves rabbits. Clutter-busting for me, soft plushie for them – win-win! 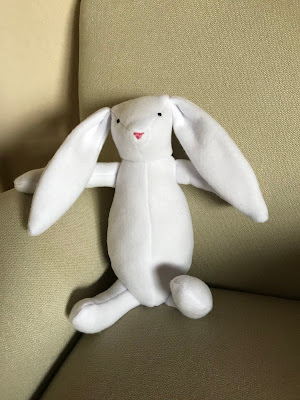 For Christmas, I made the Langston Shrug for my niece, using Rowan Wool Cotton 4-Ply, Rich colorway. The pattern comes in sizes 3 months to 10 years! While I love this shrug, I think that it would have been better without cotton in the yarn – the wool-silk blend that is recommended would, in fact, be better to show off the cables. I used a button from my stash and paired it with a purple dress from Tea Collection, because purple is my niece’s favorite color. 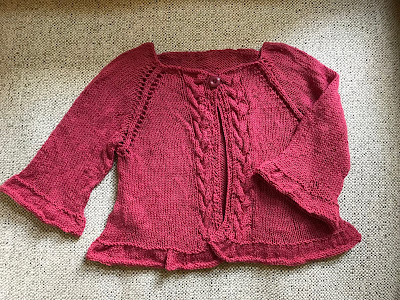 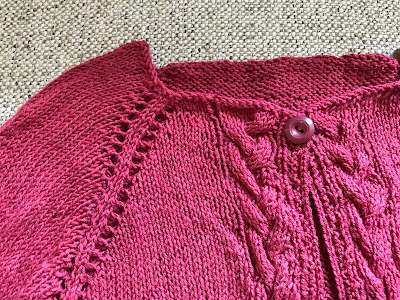 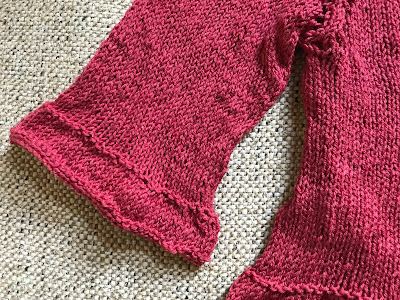 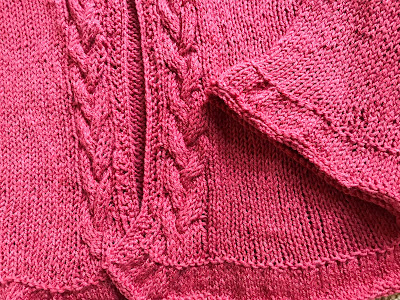 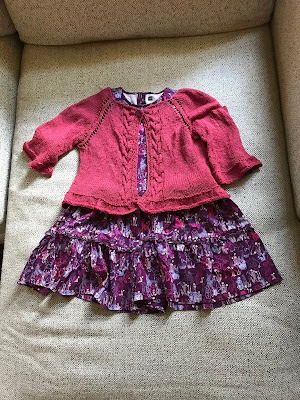 I had a skein of that yarn left, and found out that some friends were expecting a little girl in a few months, so I made the Demne cardigan by Knitsofacto – it’s a free pattern in newborn size, and it calls for only 100 grams of yarn, so this was perfect! It’s knit vertically, starting with the left sleeve, but the cuff is knit last because of a special bind-off. The pattern is a bit hard to follow, mostly because it takes a while before you see the shape of a cardigan emerge so you really have to trust the instructions. (To speed things along, I did some of the seams along the way instead of at the very end, because it was getting to be a tangle of scrap yarn and stich holders.) My beef with this is that both side seams are worked in the recommended three-needle bindoff, which actually adds a row, but that row was NOT accounted for in the pattern! So as you can see, the space between the vertical purl rows is wider at the seam than in other places. It’s something that I notice, as a knitter, but I’m not sure to what extent anyone else would notice. That being said, I’d work one row less next time before binding off. The buttons are from my mother’s stash. 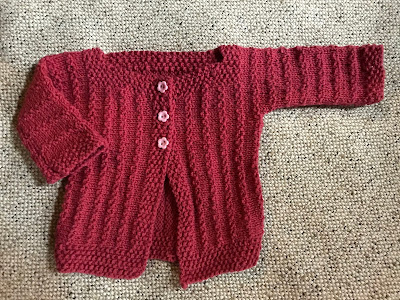 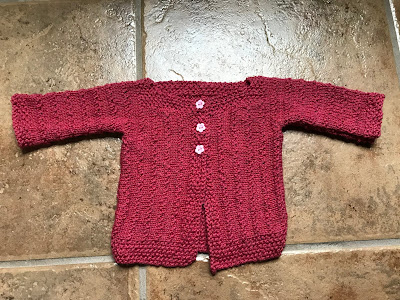 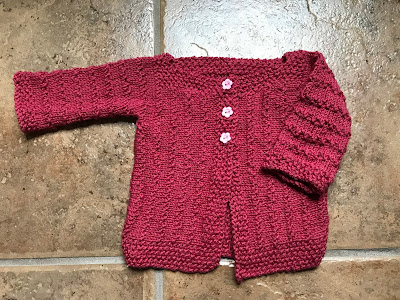 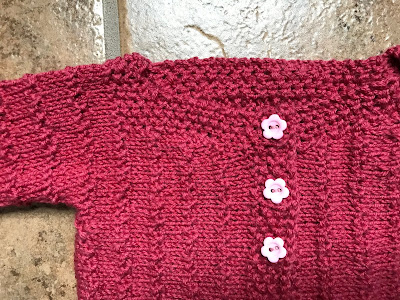 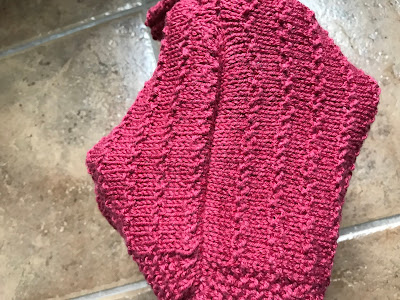