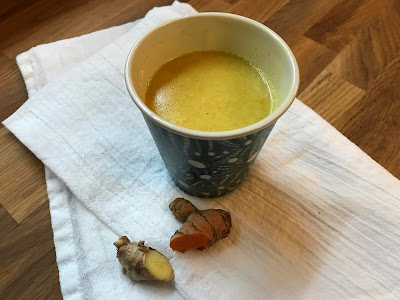 I’d been meaning to try golden milk for a while now, and with the weather getting colder, it seemed like the perfect opportunity. I first tried a recipe from Minimalist Baker. It was delicious, but I did find that using ground turmeric gave it a bit of a gritty feel. Then, when I got stuck with a lot of extra fresh turmeric, I looked around for another recipe and settled on This Healthy Table, which also yielded delicious results! That being said, I think the turmeric flavor was in fact more pronounced with the ground version (which is why the Minimalist Baker uses ground instead of fresh). So I think I would make the original recipe and pour the mixture through a fine-mesh strainer to remove any bits of turmeric powder. Alternatively, I would grate fresh turmeric and/or ginger (instead of slicing it) and put that into the mixture, and use a fine-mesh strainer anyway. My version is below. It feels like it would be good to nurse a cold, or to replace tea and coffee in the winter (for those of us who don’t typically drink either). I’m now thinking I should work on a white chocolate version…

Whisk to combine and warm over medium heat. Heat until hot to the touch but not boiling, about 4 minutes, whisking frequently.

Turn off heat and taste to adjust flavor. Add more sweetener to taste or more turmeric or ginger for intense spice + flavor.

Remove the cinnamon stick and pour the mixture through a fine-mesh strainer. Serve immediately, dividing between two glasses or mugs. Dust with cinnamon.

Best when fresh, though leftovers can be stored covered in the refrigerator for 2-3 days. Reheat on the stovetop or microwave until hot. 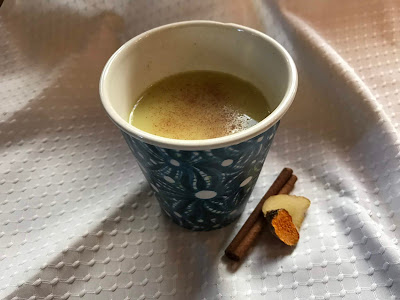