I delayed on writing this post because I wanted to do a round-up of our fall outings, but it turns out there was just the one. The Little Prince moved up a level in his swim class, and weekday classes are booked solid, so now each weekend day has a swim class for one kid, plus naptime for the Fox, and of course our weekdays have school and work, so it’s harder to find the time to go anywhere. I also feel like the outing ideas I have for now would require the Fox to be a bit older, so hopefully inspiration will strike again.

In the meantime, our September outing was to the small town of Castroville, just west of San Antonio. It is named for its founder, Henri Castro, a Frenchman of Jewish Portuguese ancestry, who is credited with introducing more than 2,100 immigrants to Texas (second only to Stephen F. Austin, apparently).

Castroville is known for its Franco-German heritage. The visitor center is Steinbach Haus, which was built in Alsace from 1618 to 1648, shipped here in pieces around 1988, and reassembled by Alsatian students in 1998. It is now filled with 17th-Century antiques. You can also pick up a city guide there and use it to take a walking tour. 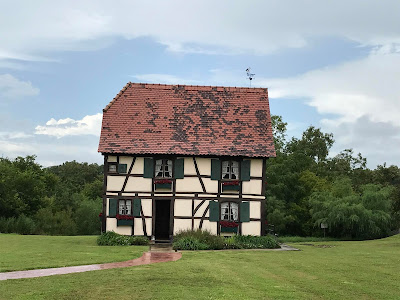 Just on the other side of the Medina River is the Landmark Inn Historic Site. Built in the 1840s, it was once an important stop on El Camino Real, the route from San Antonio to Mexico, being an inn as well as a mill and a trading post. Castroville itself was founded in 1844.

Don’t miss the “new” St. Louis Catholic Church, completed in 1870 (the tiny old church is a block south). There is a big festival every August. You could easily walk around the historical part of town from there, and/or shop for antiques. (That being said, because the recent rain had created enough water to engulf some sidewalks, and because I could tell the Engineer was getting crotchety, we didn’t stick around.) Some of the houses in that area are in fact reminiscent of what I’ve seen in Quebec or New England.

Our last stop before going home was Haby’s Alsatian Bakery (which is closed on Sundays). There is a vast array of breads, donuts, apple fritters, cinnamon rolls, cookies, frosted cookies (our favorites), and other assorted pastries (sleeper hit: the small chocolate-covered peanut halva with multicolor sprinkles). Prices are very reasonable, too! 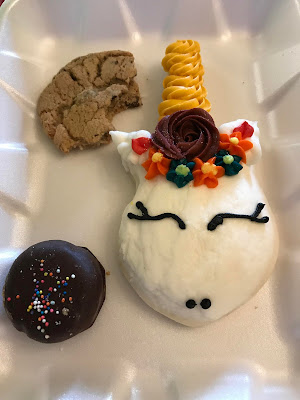