At the tail end of summer, I made a few recipes with stone fruit, which was just perfect here in Texas. The always-lovely almond torte with sugared apricots made an appearance, and I tried a cinnamon oatmeal peach crisp which, sadly, did not live up to my expectations. Then, when I saw red apricots, I couldn’t resist buying them and trying a vegan version of the ice cream I’ve been seeing everywhere that calls for whipped cream and sweetened condensed milk – sadly, I still need to work on it to get the consistency right, so no recipe just yet; but look how pretty! 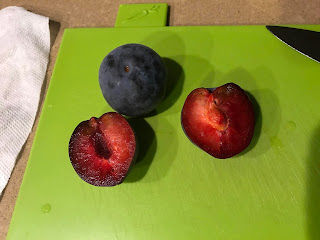 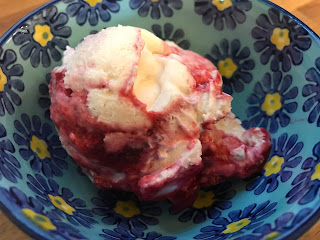 I ended up also trying a recipe I bookmarked on Not Without Salt several years ago: cardamom cake with plum jam and coffee buttercream. It was delicious! I ended up overcooking the plums a bit, so to counterbalance the loose consistency of the plum jam, I added a cornstarch slurry. Honestly, it was hard to gage in the pan! Perhaps “jam” is the wrong word here, though; it should be more of a plum filling. Also note that while the cake was delicious as is, you could consider omitting the coffee from the buttercream, to end up with a plain vanilla Italian meringue buttercream. I did love the consistency of that frosting, though, even if it is more complicated than American buttercream!

It turns out that my cake layers were concave, which became very obvious once I had cut into the cake (it really didn’t show before I assembled it, I swear!). So I decided to bite the bullet and buy both baking strips and baking heating cores; I’ll let you know how that went next time.

For the plum jam
1 lb. fresh plums, pitted and halved (I quartered them)
¼ cup sugar

For the cake
Preheat the oven to 350 °F. Grease two 8”x2” round cake pans and line the bottoms with parchment paper; grease again.

Whisk together the eggs, egg yolks, vanilla, and sour cream in a medium bowl. Set aside.

In the bowl of a stand mixer fitted with the paddle attachment, mix the flour, sugar, baking powder, baking soda, salt, cardamom, and orange zest (if using). Turn the mixer on low and mix until everything is combined. Add the butter while the mixer is still running and continue to mix until the mixture resembles coarse sand. Slowly add half of the wet ingredients and beat until combined. Add the remainder of the wet ingredients, speed up the mixer to medium speed, then beat for 20 seconds. Scrape down the sides and bottom of the bowl with a spatula. Finish the batter by stirring with the spatula a few more times.

Divide the batter between the prepared pans and smooth the top. Bake for 17 to 22 minutes or until the cakes are golden brown and pulling away from the edges of the pan ever so slightly.

Transfer the pans to a wire rack and let cool for 30 minutes. Turn the cakes out onto the rack, remove the parchment, and let cool completely.

For the jam
Combine the plums and the sugar in a medium saucepan. Bring to a simmer and cook for about 15 minutes or until the plums start to break down and the juices look like warm honey. (This is where I had trouble and cooked the mixture too long; I used a cornstarch slurry to thicken it and only used about half of it on the cake.)

For the frosting
Combine the sugar and about ¼ cup water in a small saucepan.

Bring the sugar to a boil, then cook to 240 °F or soft ball stage. (Apparently, you can test this by blowing a sugar bubble through the tines of a fork, but I didn’t want to risk that!)

While the sugar cooks, whip the egg whites to soft peaks.

Carefully stream the sugar down the side of the bowl with the machine running on medium speed. Increase the speed and whip until the bowl is no longer hot.

Add the butter, 1 tablespoon at a time, and whip until smooth. IT may look like a mess, but keep whipping until it comes together.

Add the vanilla, coffee and salt.

Pipe a border around the edge of the first cake layer. Fill with the jam. Add the other cake on top, then cover the layers with frosting. (I put on a crumb coat and refrigerated for 20 minutes, then frosted as usual.) 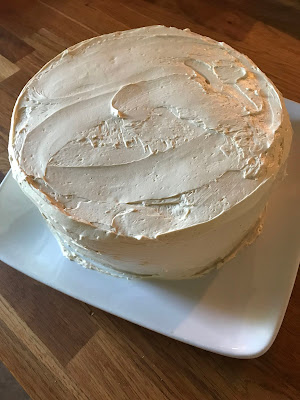 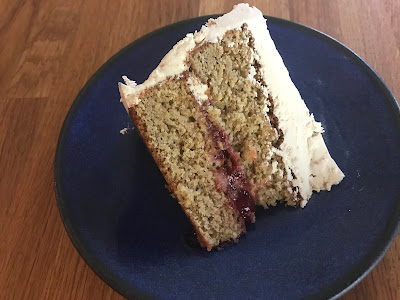 I made my own baking strips with old kitchen towels and safety pins. Works wonders!

Do you suppose the cake needed the frosting or do you think it would have been good without it?

The cake was very good without the buttercream, so you could make it without. In that case, though, I feel like I would serve it with extra plum jam. Then again, for me, it's hard to turn down (lactose-free) Italian or Swiss buttercream!