This is a recipe that can easily be made vegan or gluten-free, as needed. It originally calls for pumpkin, but you can use any orange-flesh squash – I used butternut, but Red Kuri or Golden Hubbard would work, too. What was unusual here is that you basically start by making a roux with corn flour, but I’m actually not sure whether that’s a good idea, because I found that it sticks to the bottom of the pot, and some of it was burnt by the time the chili had thickened and cooked properly. That being said, it was still pretty easy to clean the pot after letting it soak, so no harm done. Maybe I should have used the full amount of butter and oil (I had halved it), maybe I should have stirred more often, who knows. Note that since nobody in our house likes turnips, I used potatoes instead, and I used fire-roasted tomatoes instead of tomatoes with green chiles. I’m also thinking that perhaps one should add the tomatoes closer to the end of cooking, since the acid in them inhibits the cooking process and that might explain why it took hours for the squash to be tender! The recipe is originally from The Kitchn.

Peel the pumpkin or squash and cut into 1-inch pieces or smaller. (To make it easier to peel the pumpkin, you can cut it in half, remove the seeds and then microwave each half cut-side down in a shallow dish of water for 5 minutes, or roast the halves at 450 °F for about 15 minutes. When the pumpkin is cool enough to handle, shave off the skin with a sharp knife. With a butternut squash, though, I rarely have trouble.)

In a 6-quart or larger Dutch oven or soup pot, heat the butter and olive oil over medium heat. When melted, whisk in the cornmeal until smooth, then stir in the pumpkin, turnip, bell peppers, onion, garlic, and tomato paste. Cook, stirring frequently, for about 10 minutes.

Add the broth, diced tomatoes and their juices (see note above – consider adding this only towards the end), beans, and corn. Stir in the Korean pepper, cinnamon, cumin, and Worcestershire sauce. Bring back to a simmer. Reduce the heat and simmer for at least 1 hour, or until the pumpkin and turnip are tender. (It gets even better if simmered longer — a whole afternoon, if you have the time. That being said, the corn flour stuck to the bottom of my pot, so do stir from time to time!)

Before serving, taste and season with salt and pepper and a dash of balsamic vinegar. Serve hot with green onions, shredded cheddar cheese, and sour cream if desired. 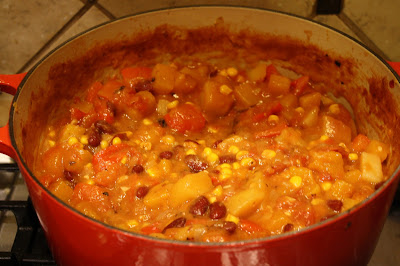 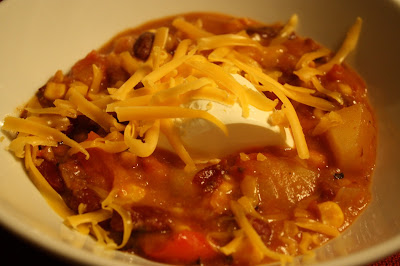