I can’t even tell you how wonderful this pork tenderloin was. It’s from Root Down in Denver and was published in Bon Appétit. I made a few changes: I cooked the pork more thoroughly after searing it; I reduced the amount of green curry paste and used maple syrup instead of agave nectar; and I retroactively decided that the pepitas, while pretty, don’t have their place in this dish. The sauce was out of this world – I encourage you to ladle it generously over rice, and heck, serve it in a glass while you’re at it, it’s that good. The version below is mine.

Preheat oven to 350 °F. Heat grapeseed oil in a large ovenproof skillet over medium-high. Cook tenderloin, turning occasionally, until browned on all sides, about 5 minutes. Transfer to oven and roast until an instant-read thermometer inserted into the thickest part of tenderloin registers 160 °F, 20–30 minutes. Transfer to a cutting board; let rest at least 10 minutes before slicing.

For the sauce and assembly
While meat is cooking, heat 1 Tbsp. oil in a saucepan over medium heat. Cook shallot and garlic, stirring often, until softened, about 3 minutes. Add curry paste and lime zest and cook, stirring constantly, until paste is slightly darkened in color and very fragrant, about 4 minutes. Add coconut milk, bring to a simmer, and cook until reduced by half, 20–25 minutes. Let curry mixture cool.

Transfer curry mixture to a blender and add maple syrup, lime juice, ¼ cup cilantro, and 2 Tbsp. water; blend until very smooth. With motor running, add remaining ½ cup oil in a steady stream; blend until sauce is thick and emulsified. Transfer to a small saucepan and heat over medium just until warmed through (the sauce can be made a day ahead and reheated).

Serve pork with rice; ladle with sauce and top with cilantro. 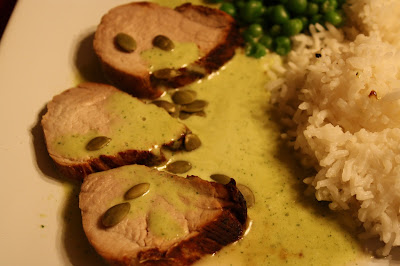