I don’t know if you remember when I had made enchiladas, with a store-bought mild enchilada sauce that was spicy as heck (it now reminds me of the plot of Dragons Love Tacos, come to think of it). Well, I tried them again, this time with my take on a homemade sauce. I got the sauce recipe here, but obviously any recipe that basically has you make a roux with more chili powder than flour needs some changes if it’s going to pass in my kitchen! So the version below is my own. Note that it makes less than the 28 ounces called for in the enchilada recipe, but I found that I had just enough anyway.

As for the filling: the original recipe (from the Weelicious cookbook, but available here) calls for cooked chicken, but as it happened, I had plenty of turkey leftover from Thanksgiving. Since I had decided to make all the same sides as last year, I figured I could take a chance and try a new turkey recipe, especially one that is made on the stovetop and frees up the oven for my sides! Enter turkey with pumpkin, figs and honey. Since I couldn’t find 2 turkey breasts and 2 turkey drumsticks at the store (as the recipe calls for), I ended up getting a big half turkey (breasts only) and I asked the butcher to cut it up into manageable pieces for me, essentially removing the carcass and cutting the breasts in half. I hadn’t looked at the price carefully before handing this off to the butcher; I took something that was mid-range, meaning I preferred a bird that had had a good life and a humane death, but I didn’t need a heritage breed. It turned out to be just over $60 (for what had weighed just over 12 pounds with the carcass). So obviously, I initially fretted about spending so much on turkey, but as it turns out, I split that turkey into 8 pieces: I cooked 5 for Thanksgiving, 2 of which made over 8 servings, then I used some in these enchiladas and froze the rest; I also and froze 3 raw pieces of turkey breast. So really, if I count the price per serving, it was *totally* reasonable. Having leftover poultry made these enchiladas super easy, so you could feel free to substitute what you have on hand – or use plain cooked chicken, too, including from a store-bought roast chicken.

Heat the oil in a saucepan on medium heat. Add the flour and Korean pepper and stir. Keep stirring until the mixture thickens.

In a small bowl, mix the tomato sauce with the rest of the ingredients until it is fully blended. Add to your saucepan and whisk until fully mixed. Cook for 8-10 minutes on medium heat until thickened.

After the mixture has cooled, add the chicken, corn, and 1 cup cheese and mix to combine.

Divide the mixture, placing it in the middle of each tortilla (about ½ cup in each) and rolling it up like a wrap (burrito shape). Place the rolled enchiladas close together, seam side down, in the sauced baking dish. Continue to roll the rest of the filled enchiladas.

Once you have finished making the stuffed enchiladas, pour the rest of the enchilada sauce over them and top with remaining ½ cup cheese. (The enchiladas can be frozen at this point.) Cover the dish with foil and bake in the oven for 15 minutes (or 30 minutes if from the freezer). Serve. 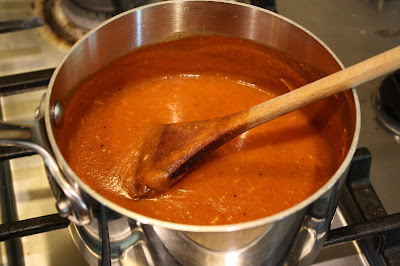 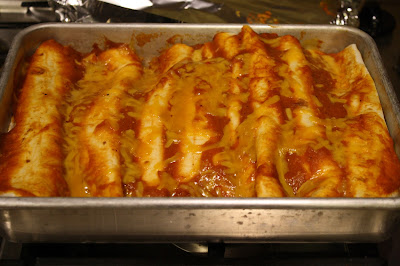 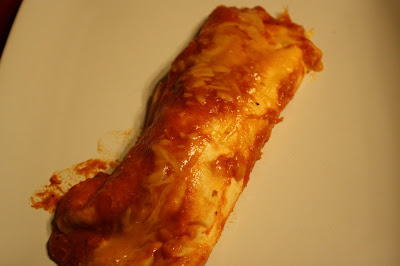