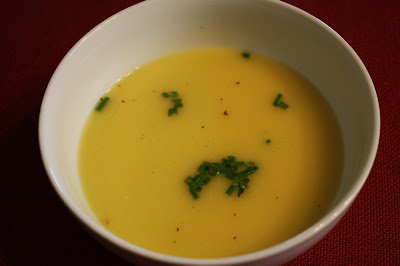 Even though it still certainly feels like summer over here, it’s not peak corn season anymore. No matter, because I did get to make this truffled corn soup (and also enjoyed more of summer’s bounty in the form of heirloom tomatoes with homemade, lactose-free ricotta and herbs). I had actually bought the truffle salt for this last year, and in a freak coincidence, the Engineer decided to make corn chowder because that’s where he was at in his book at the time. I didn’t want to follow up corn chowder with corn soup, and then I was reluctant to buy past-peak-season corn, so I put it off. Luckily, truffle salt keeps indefinitely, and a little goes a long way, so I still had plenty on hand to make his last month!

The recipe, as is written, serves 4 because it calls for you to filter out all the pulp and solids. I tried one bowl that way, and while it’s true that it was really good, I didn’t want to waste most what was in the pot, so I just ate the rest as it was (that probably serves 6). The strained soup could be served chilled, but I liked the heartier version warm. Both are pictured (the strained version in the round bowl, the heartier one in the square bowl). I really liked this soup and would absolutely make it again, even without the truffle salt. Maybe some roasted pepitas on top would be a nice touch? Or a topping like this one.

Cut the corn kernels off the cobs and set aside. Place the cobs in a stockpot or Dutch oven and add the water. Bring to a gentle boil over medium-high heat, then reduce the heat to medium-low, cover, and simmer for 20 minutes.

Meanwhile, melt the butter in a large frying pan over medium heat. Add the shallot and cook until softened, about 3 minutes. Add the corn kernels, a couple of big pinches of salt and a few grinds of pepper, and sauté for another 2 minutes. Remove the pan from the heat and set aside.

Remove the corn cobs from the stockpot and add the corn mixture to the broth. Bring to a boil, then cover again and simmer 25 minutes.

Purée the soup, working in batches if necessary, in a blender until completely smooth (alternatively, blend directly in the pot with an immersion blender). Taste and adjust seasoning, adding more salt and pepper as needed.

Strain the soup through a fine-mesh strainer in a clean pot or large bowl, pressing on the solids to squeeze out as much liquid as possible; discard the solids (see note above). Serve immediately, or refrigerate for a few hours or overnight to serve cold. Garnish each bowl with a sprinkle of chives and truffle salt before serving. 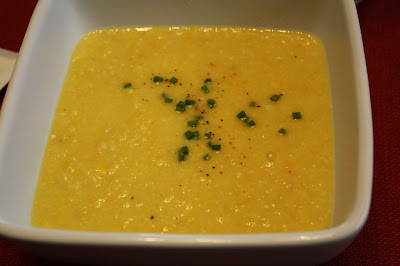