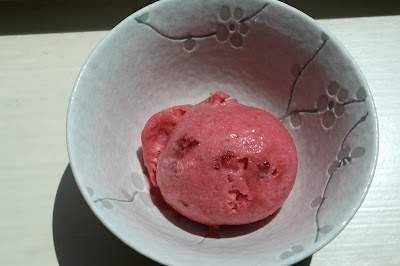 When we got back to San Antonio, I was lucky enough to buy a handful of large rhubarb stalks from the second harvest. These were bright pink, and I put them to good use! The first thing I made was rhubarb sorbet. I had read the recipe and saw that it called for a little corn syrup, to prevent the sorbet from being too hard. But I’ve been burned before, in the sense that I often find sorbets and vegan ice creams too hard, even in the case of popsicles (as had been the case, last summer, with coconut rhubarb popsicles and piña colada popsicles that I ended up never posting about). So I decided to add a bit of vodka that I had sitting around in the freezer, reduced the amount of water and opted not to strain the sorbet, and when eaten straight from the freezer, the consistency was absolutely perfect for my taste! I thought it was a bit heavy on the ginger, to the point that it masked the rhubarb taste, so I’d use less next time. It was really good, though, very refreshing, and it had a gorgeous pink color! The quantities below are mine, based on how much rhubarb I had available.

Put the chopped rhubarb, water, sugar, orange zest, ginger, and salt into a 3 to 4-quart pot. Heat on high heat to bring to a boil. Lower the heat to low to simmer, covered, for 5 minutes, or until the sugar has dissolved and the rhubarb is falling apart tender.

Remove from heat and let cool for 10 minutes. Either use an immersion blender or work in batches with a standing blender to purée the mixture until smooth. Press the mixture through a fine mesh sieve to remove any of the stringy pulp (I didn’t do this, but my pulp was not stringy to begin with). Stir in the corn syrup and vodka.

Cover and refrigerate until totally chilled, several hours or overnight.

Process in your ice cream maker according to the manufacturer's instructions. 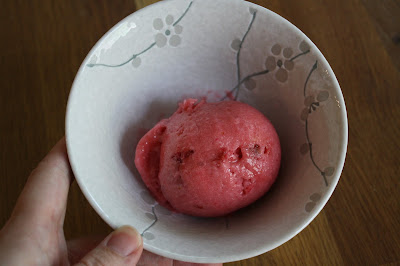