This recipe was originally titled Holiday Nog Pie with Coconut and Gingersnap Crust, and it was vegan. I couldn’t find vegan eggnog, though, so I used Lactaid’s lactose-free pasteurized eggnog. I made a non-alcoholic version, naturally, so that’s what I’m writing below. You can also make this nut-free by using something other than almond milk. For the coconut milk, make sure to use something without stabilizers, otherwise it won’t congeal properly in the fridge.

In the original recipe, one had to reduce 1 cup of eggnog down to ¼ cup and then proceed with making the filling. However, that made a very small amount of filling, more like a little puddle in the crust – it didn’t even reach all the sides! So I went ahead and doubled the amounts, below. I think that the original amounts would be alright for a 6- or 7-inch tart pan, but certainly not the standard 9-inch pan that was recommended! You might have filling left over, in that case, but I’d prefer that to not having enough. I don’t think that simply reducing the eggnog to a lesser extent would be a good idea, from a consistency standpoint.

With the rest of my eggnog, I made bread pudding, which was only so-so – I think French toast would have been better! I also drank a small glass of it, but this isn’t the kind of beverage I would consume in large quantities, even during the holidays.

Preheat oven to 325 ˚F. Line the bottom of a 9″ tart pan with parchment paper and spray with oil; set aside.

In a food processor, mix the gingersnap cookies, coconut flour, ground ginger (if using), and sea salt into a fine meal. While the processor is still running, drizzle in the coconut oil and continue processing until the crumbs have completely absorbed the oil (no more than 30 seconds), then drizzle in the almond milk and pulse just until combined. Press the mixture between your fingers to make sure it sticks together. If so, you’re good to go; if not, add almond milk, 1 tablespoon at a time, until the mixture sticks together when pressed between your fingers.

Press the crumbs into the bottom of the tart pan and up the sides. Transfer to the freezer to chill for 10 minutes. Once chilled, put on a baking sheet and place in oven. Bake for 11-12 minutes. Once baked, remove from oven and cool on a wire rack.

Put the eggnog in a small saucepan set over medium heat and cook until reduced to a scant ½ cup, about 25-30 minutes (make sure to keep an eye on this, especially if there’s real dairy in your eggnog, as milk can boil over). Once the mixture has been reduced, open the cans of coconut milk and scrape the thick, white cream off the top (you should have at least 400 g. of cream) and add it to the saucepan. (I freeze the coconut water that remains, with the intention of using it for smoothies.) Add the sugar, coconut oil, and nutmeg, and simmer on medium heat for about five minutes, whisking every minute or so. Remove the pan from the heat and set it aside to allow the mixture to cool for about 15 minutes.

Slowly pour the mixture into the crust. Refrigerate for at least 12 hours, then transfer to the freezer to firm up completely (two more hours).

When you’re ready to serve, remove from freezer, top with freshly grated nutmeg or topping of your choice, and let sit at room temperature for about 15 minutes before slicing. 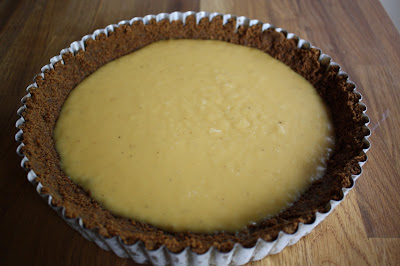 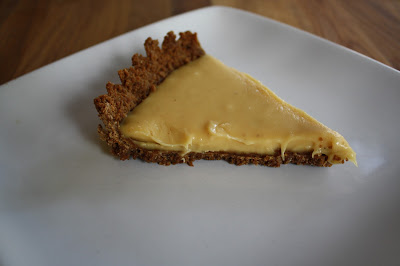