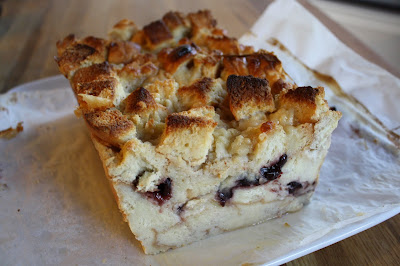 I really like bread pudding. Or at least, I do in theory, even though some recipes fall flat (like orange maple French toast casserole, a somewhat bland dish that called for twice as much syrup as it should have and in which the orange segments completely disintegrated). Luckily, the LCBO’s Food & Drink came through with this recipe for black cherry and marzipan bread pudding, published over the holidays. It was fantastic! A bit nerve-racking, though, because there’s really a lot of bread cubes and liquid to fit into a loaf pan, but it all worked out for the best. And the result was a moist bread pudding sturdy enough that it can be unmolded and sliced – it was delicious as part of an indulgent breakfast, but it could work for dessert as well. I just love the combination of almond and cherry, especially when the almond is in the form of marzipan!

Note that I’m giving you the amounts that worked for me below (including lactose-free substitutions). Also, I recommend putting the marzipan in the freezer for 30 minutes before starting on the recipe, it’ll be easier to grate that way. I used a big loaf of challah (though brioche would work too) and sliced it into roughly 1”-cubes.

Generously grease a 9½ x 4½-inch (24 x 11 cm) loaf pan. Line with a strip of parchment trimmed to the length of the pan (the ends don’t need to be covered), leaving ample overhang along sides to later become handles and aid in the removal of the loaf.

In a large bowl, whisk together the milk mixture, eggs and egg yolks; stir in vanilla, sugar, salt and cinnamon. Gently pour over bread (really take your time here) and let stand for 20 minutes to allow bread to absorb custard mixture. Sprinkle decorative sugar overtop and bake for 40 minutes or until puffed and golden. Let stand at room temperature for at least 1 hour (hot bread pudding will be too delicate to turn out) before removing from pan and slicing into pieces. 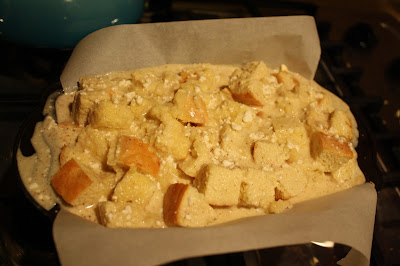 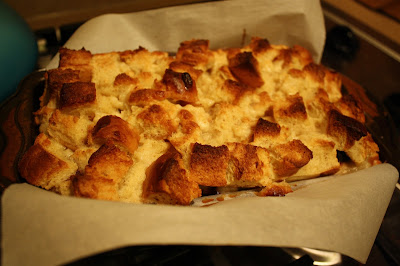 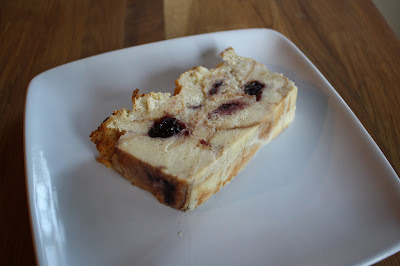