I am just now getting around to posting about Christmas… Hopefully I’ll be more on the ball next year! Our meal consisted of traditional meatball stew (63 meatballs this year), turkey with a pear and maple glaze, as well as mashed potatoes. But the recipe I want to share is the bûche de Noël, or Yule log. I went with the recipe published in Bon Appétit in 2015, because I’d been eying it enviously for a year. I won’t lie: it’s very involved, as there are many steps, and yes, there was swearing at one point, but everything actually went just fine, and it was a beautiful bûche. I had to make a few substitutions to reduce the amount of lactose, but I didn’t eliminate it completely. The ganache filling isn’t exactly a ganache, as the cream gets whipped; we don’t have lactose-free cream in the US, and the vegan substitutes I know wouldn’t have held up to the melted chocolate, so I used real cream. I think one could use coconut milk and forgo the whipping step. Also, I used lactose-free cream cheese instead of mascarpone.

There is one thing I’m flat-out changing in the recipe, though: the original recipe called for a 26”x18” rimmed baking sheet. I didn’t have anything nearly that size, so I bought the largest one I could find, a 21”x15” rimmed sheet. As it turns out, it was the absolute biggest size that could fit in my oven! Moreover, I felt like there wasn’t enough cake batter for it (ours didn’t quite reach the edge), so honestly, if your rimmed sheet is a bit smaller than that, it’ll be fine. Note too that because our sheet was smaller, the bûche was shorter and looked a bit too squat for my taste with two branches; next time I’d only make one branch, so that the bûche remains a bit longer.

I had a nasty cold that prevented me from actually tasting anything that night, but I stuck a piece in the freezer. I got to it a few weeks later, so I can attest that a) this bûche freezes well (without the meringue mushrooms), and b) it is delicious. It wasn’t too sweet, and the buttercream was glorious!

Again: this is a long process, so it helps to have a sous-chef. Some of these steps can be made ahead of time, which is what I recommend.

Make meringue
Preheat oven to 225 °F. Whisk egg whites, sugar, cream of tartar, and salt in a large heatproof bowl (I used the metal bowl of my stand mixer) set over a medium saucepan of simmering water (the bowl should not touch the water), until egg whites are very liquid (the mixture will be warm to the touch) and sugar is dissolved (rub between your fingers to check), about 5 minutes. Remove bowl from heat and beat with an electric mixer until stiff, glossy peaks form (the bowl will feel cool), about 5 minutes.

Create mushrooms
Line a rimmed baking sheet with parchment paper and dust very lightly with cocoa powder. Scoop out 1 cup meringue. Dollop heaping teaspoonfuls of meringue onto prepared baking sheet, spacing at least 1 ½" apart.
Lightly dust meringue with more cocoa powder and place a sheet of parchment over top. Use an offset spatula or your hands to flatten meringue into irregularly shaped disks about ⅛" thick.
Bake until lightly browned and parchment peels away easily, 75–90 minutes (meringue will be soft when it first comes out of the oven, but will dry and crisp as it cools).

A word of warning: be very gentle when removing the paper from the meringues. Some will break, but don’t panic! You have enough spares that you can still make a beautiful bûche without all of them. 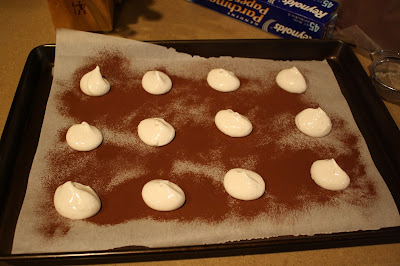 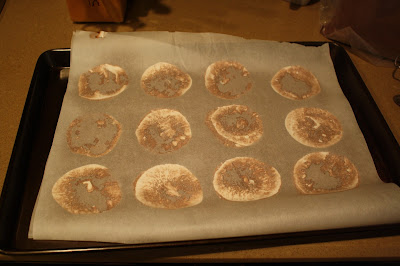 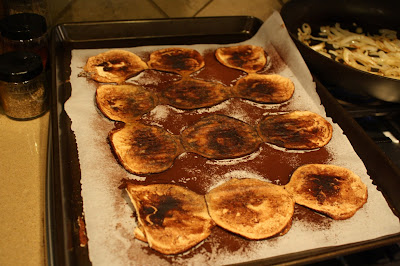 Mix buttercream
Meanwhile, with mixer on medium speed, beat butter into remaining meringue, adding a piece at a time and waiting until incorporated before adding more. Beat until mixture is very smooth. (If it looks very loose or curdled, just keep beating; buttercream will come back together.) Add vanilla extract and scrape in vanilla seeds; beat to combine.

At this point, I feel I have to interject and give you additional information. Yes, it is possible, and even totally normal, for the buttercream to look a bit curdled, and it will come together if you keep beating it. However, if your butter was still slightly too cold, it will separate (think lumpy and loose) and you won’t be able to beat it back together quickly. Again, don’t panic! It turns out there’s a very easy fix: scoop out some of the mixture (maybe ½ cup here) and microwave it until it is liquid. Then, drizzle it back in as you are mixing. I have tried this and can vouch for the method, it works like a charm. This buttercream is surprisingly resilient! You can also give it another whip right before using it.

Cook sugar and water in a small saucepan over low heat, stirring until sugar is dissolved. Remove from heat; add cocoa powder and almond extract and whisk until smooth.

Combine chocolate, cocoa powder, espresso powder (if using), vanilla, and salt in a medium heatproof bowl. Bring cream to a simmer in a small saucepan over low heat; pour over chocolate mixture. Let sit until chocolate is melted, about 5 minutes. Whisk until smooth; let cool. Using an electric mixer, beat ganache until light and fluffy (it should be the consistency of whipped cream).

Bring milk, butter, oil, vanilla, and salt to a simmer in a small saucepan over medium-low heat. Keep warm over low heat.

Meanwhile, beat eggs and egg yolks with an electric mixer on medium speed until smooth. Increase speed to high; beat until doubled in volume. With motor running, gradually add sugar; beat until very light and fluffy and mixture falls back on itself in a slowly dissolving ribbon (it should be at least quadrupled in volume), about 5 minutes.

Reduce speed to medium and gradually stream in milk mixture. Sift one-third of dry ingredients over top; gently fold in until only a few streaks remain. Working in 2 additions, repeat with remaining dry ingredients, scraping bottom of bowl and using as few strokes as possible to keep eggs from deflating (a few streaks are fine). Scrape batter into prepared baking sheet and gently spread to edges of pan. Tap sheet lightly on counter to pop any large air bubbles.

Bake cake until surface is puffed and springy to the touch, 10–12 minutes. Make sure you move right onto Step 4! 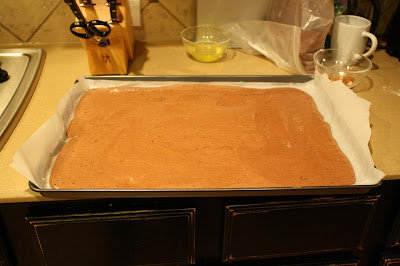 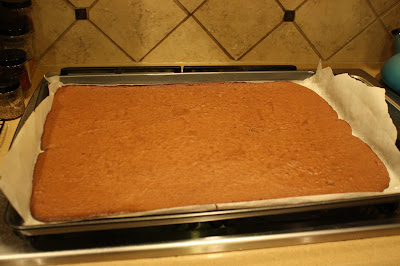 Step 4: Roll up and cool sponge cake
Let cake cool in pan 2 minutes, then run a knife along short edges to loosen. Invert onto a wire rack and carefully peel away parchment.

Using a fine-mesh sieve, dust cake with cocoa powder. Cover with a large kitchen towel (I now have one dedicated to the bûche, in addition to the one dedicated to latkes).Place another wire rack on top. Flip cake over so towel side is underneath. Remove top rack; dust exposed side with cocoa powder. Starting at one of the long sides, gently roll up warm cake inside towel.


Step 5: Fill and reroll sponge cake
Carefully unroll towel and cake on a flat surface (cake will curl at the ends and may have a few small cracks but should stay in 1 piece). Position cake so the end that was in innermost part of spiral is closest to you; brush off any excess cocoa.

Using a pastry brush, gently dab cocoa syrup over entire surface of cake; you may not use it all.

Dollop bittersweet ganache over top and smooth with an offset spatula to create an even layer.

Dollop mascarpone filling over ganache; carefully spread over surface, trying not to blend with ganache and avoiding last inch of cake along long side farthest from you.

Using towel to lift edge nearest you, reroll cake, keeping towel on exterior. Chill, seam side down, until filling is set, about 30 minutes.

Using a long serrated knife, trim ½" of cake from each end to create clean edges; discard (or eat!). If you want to make 2 branches, slice off a 4" piece of cake. Starting 1" from end, divide 4" piece in half, cutting at a 45° angle, leaving 1" at opposite end. If you used a smaller rimmed sheet, I’d recommend making only one branch, so you’d have to slice it off at a 45° angle and trim the end piece again (more taste testing!). Transfer log to a platter.

Place angled side of each small piece of cake against roll to create branches, positioning one on top and the other on the side, using a large dab of buttercream to secure. Cover any exposed cake on sides with more buttercream, but leave cut ends exposed.

Use a spatula to create textured lines in buttercream to look like birch bark.

Knead together marzipan and cocoa powder on a surface until smooth. Roll out on a sheet of parchment paper to less than ⅛" thick, then cut out wavy strips to look like tree knots; drape over buttercream and press gently to adhere.

Using either a pastry bag fitted with a very small round tip or a disposable plastic bag with one corner snipped off, drizzle melted chocolate over log to mimic birch bark striations. 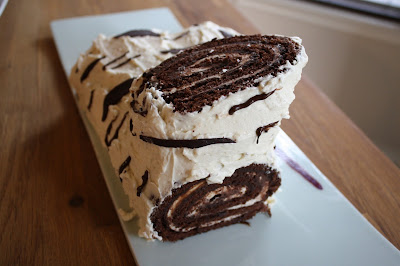 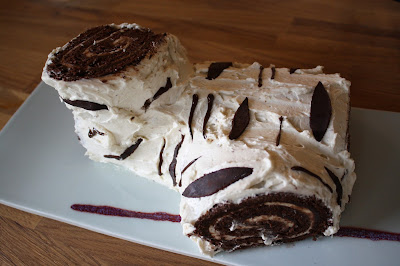 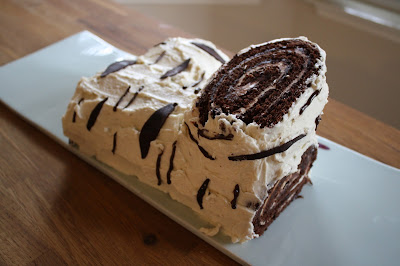 Just before serving, press mushrooms perpendicularly into log in groups of 2 or 3. 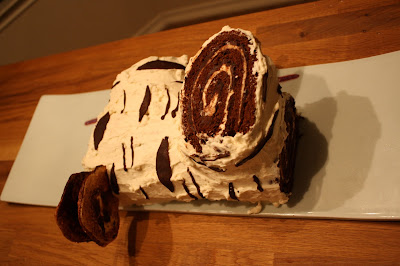 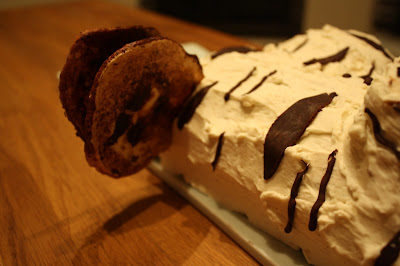 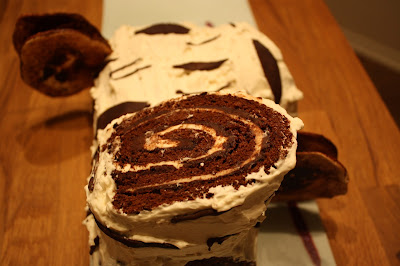 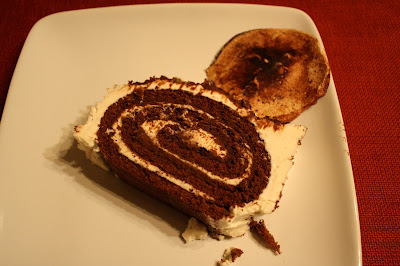